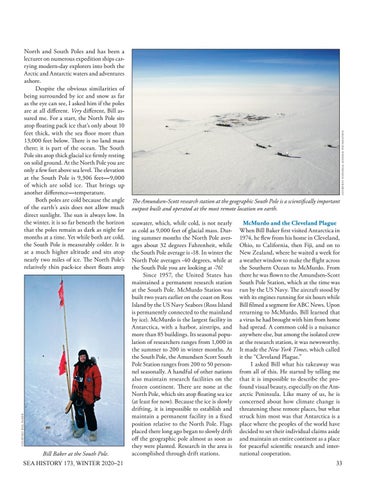 Bill Baker at the South Pole.

North and South Poles and has been a lecturer on numerous expedition ships carrying modern-day explorers into both the Arctic and Antarctic waters and adventures ashore. Despite the obvious similarities of being surrounded by ice and snow as far as the eye can see, I asked him if the poles are at all different. Very different, Bill assured me. For a start, the North Pole sits atop floating pack ice that’s only about 10 feet thick, with the sea floor more than 13,000 feet below. There is no land mass there; it is part of the ocean. The South Pole sits atop thick glacial ice firmly resting on solid ground. At the North Pole you are only a few feet above sea level. The elevation at the South Pole is 9,306 feet—9,000 of which are solid ice. That brings up another difference—temperature. Both poles are cold because the angle of the earth’s axis does not allow much direct sunlight. The sun is always low. In the winter, it is so far beneath the horizon that the poles remain as dark as night for months at a time. Yet while both are cold, the South Pole is measurably colder. It is at a much higher altitude and sits atop nearly two miles of ice. The North Pole’s relatively thin pack-ice sheet floats atop

The Amundsen-Scott research station at the geographic South Pole is a scientifically important outpost built and operated at the most remote location on earth. seawater, which, while cold, is not nearly as cold as 9,000 feet of glacial mass. During summer months the North Pole averages about 32 degrees Fahrenheit, while the South Pole average is -18. In winter the North Pole averages -40 degrees, while at the South Pole you are looking at -76! Since 1957, the United States has maintained a permanent research station at the South Pole. McMurdo Station was built two years earlier on the coast on Ross Island by the US Navy Seabees (Ross Island is permanently connected to the mainland by ice). McMurdo is the largest facility in Antarctica, with a harbor, airstrips, and more than 85 buildings. Its seasonal population of researchers ranges from 1,000 in the summer to 200 in winter months. At the South Pole, the Amundsen Scott South Pole Station ranges from 200 to 50 personnel seasonally. A handful of other nations also maintain research facilities on the frozen continent. There are none at the North Pole, which sits atop floating sea ice (at least for now). Because the ice is slowly drifting, it is impossible to establish and maintain a permanent facility in a fixed position relative to the North Pole. Flags placed there long ago began to slowly drift off the geographic pole almost as soon as they were planted. Research in the area is accomplished through drift stations.

McMurdo and the Cleveland Plague When Bill Baker first visited Antarctica in 1974, he flew from his home in Cleveland, Ohio, to California, then Fiji, and on to New Zealand, where he waited a week for a weather window to make the flight across the Southern Ocean to McMurdo. From there he was flown to the Amundsen-Scott South Pole Station, which at the time was run by the US Navy. The aircraft stood by with its engines running for six hours while Bill filmed a segment for ABC News. Upon returning to McMurdo, Bill learned that a virus he had brought with him from home had spread. A common cold is a nuisance anywhere else, but among the isolated crew at the research station, it was newsworthy. It made the New York Times, which called it the “Cleveland Plague.” I asked Bill what his takeaway was from all of this. He started by telling me that it is impossible to describe the profound visual beauty, especially on the Antarctic Peninsula. Like many of us, he is concerned about how climate change is threatening these remote places, but what struck him most was that Antarctica is a place where the peoples of the world have decided to set their individual claims aside and maintain an entire continent as a place for peaceful scientific research and international cooperation.