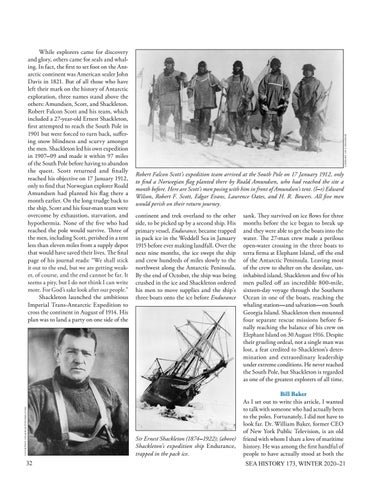 While explorers came for discovery and glory, others came for seals and whaling. In fact, the first to set foot on the Antarctic continent was American sealer John Davis in 1821. But of all those who have left their mark on the history of Antarctic exploration, three names stand above the others: Amundsen, Scott, and Shackleton. Robert Falcon Scott and his team, which included a 27-year-old Ernest Shackleton, first attempted to reach the South Pole in 1901 but were forced to turn back, suffering snow blindness and scurvy amongst the men. Shackleton led his own expedition in 1907–09 and made it within 97 miles of the South Pole before having to abandon the quest. Scott returned and finally reached his objective on 17 January 1912, only to find that Norwegian explorer Roald Amundsen had planted his flag there a month earlier. On the long trudge back to the ship, Scott and his four-man team were overcome by exhaustion, starvation, and hypothermia. None of the five who had reached the pole would survive. Three of the men, including Scott, perished in a tent less than eleven miles from a supply depot that would have saved their lives. The final page of his journal reads: “We shall stick it out to the end, but we are getting weaker, of course, and the end cannot be far. It seems a pity, but I do not think I can write more. For God’s sake look after our people.” Shackleton launched the ambitious Imperial Trans-Antarctic Expedition to cross the continent in August of 1914. His plan was to land a party on one side of the

Robert Falcon Scott’s expedition team arrived at the South Pole on 17 January 1912, only to find a Norwegian flag planted there by Roald Amundsen, who had reached the site a month before. Here are Scott’s men posing with him in front of Amundsen’s tent. (l–r) Edward Wilson, Robert F. Scott, Edgar Evans, Laurence Oates, and H. R. Bowers. All five men would perish on their return journey. continent and trek overland to the other side, to be picked up by a second ship. His primary vessel, Endurance, became trapped in pack ice in the Weddell Sea in January 1915 before ever making landfall. Over the next nine months, the ice swept the ship and crew hundreds of miles slowly to the northwest along the Antarctic Peninsula. By the end of October, the ship was being crushed in the ice and Shackleton ordered his men to move supplies and the ship’s three boats onto the ice before Endurance

sank. They survived on ice flows for three months before the ice began to break up and they were able to get the boats into the water. The 27-man crew made a perilous open-water crossing in the three boats to terra firma at Elephant Island, off the end of the Antarctic Peninsula. Leaving most of the crew to shelter on the desolate, uninhabited island, Shackleton and five of his men pulled off an incredible 800-mile, sixteen-day voyage through the Southern Ocean in one of the boats, reaching the whaling station—and salvation—on South Georgia Island. Shackleton then mounted four separate rescue missions before finally reaching the balance of his crew on Elephant Island on 30 August 1916. Despite their grueling ordeal, not a single man was lost, a feat credited to Shackleton’s determination and extraordinary leadership under extreme conditions. He never reached the South Pole, but Shackleton is regarded as one of the greatest explorers of all time. Bill Baker As I set out to write this article, I wanted to talk with someone who had actually been to the poles. Fortunately, I did not have to look far. Dr. William Baker, former CEO of New York Public Television, is an old friend with whom I share a love of maritime history. He was among the first handful of people to have actually stood at both the SEA HISTORY 173, WINTER 2020–21