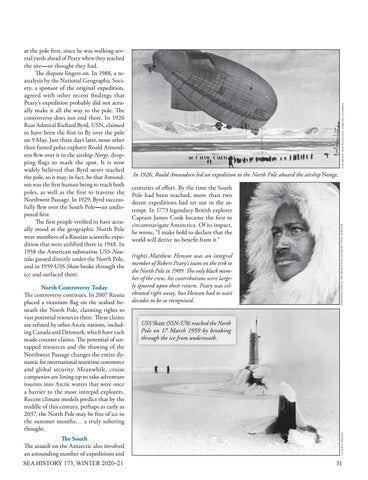 centuries of effort. By the time the South Pole had been reached, more than two dozen expeditions had set out in the attempt. In 1773 legendary British explorer Captain James Cook became the first to circumnavigate Antarctica. Of its impact, he wrote, “I make bold to declare that the world will derive no benefit from it.” (right) Matthew Henson was an integral member of Robert Peary’s team on the trek to the North Pole in 1909. The only black member of the crew, his contributions were largely ignored upon their return. Peary was celebrated right away, but Henson had to wait decades to be so recognized.

North Controversy Today The controversy continues. In 2007 Russia placed a titanium flag on the seabed beneath the North Pole, claiming rights to vast potential resources there. These claims are refuted by other Arctic nations, including Canada and Denmark, which have each made counter claims. The potential of untapped resources and the thawing of the Northwest Passage changes the entire dynamic for international maritime commerce and global security. Meanwhile, cruise companies are lining up to take adventure tourists into Arctic waters that were once a barrier to the most intrepid explorers. Recent climate models predict that by the middle of this century, perhaps as early as 2037, the North Pole may be free of ice in the summer months… a truly sobering thought.

In 1926, Roald Amundsen led an expedition to the North Pole aboard the airship Norge.

USS Skate (SSN-578) reached the North Pole on 17 March 1959 by breaking through the ice from underneath.

at the pole first, since he was walking several yards ahead of Peary when they reached the site—or thought they had. The dispute lingers on. In 1988, a reanalysis by the National Geographic Society, a sponsor of the original expedition, agreed with other recent findings that Peary’s expedition probably did not actually make it all the way to the pole. The controversy does not end there. In 1926 Rear Admiral Richard Byrd, USN, claimed to have been the first to fly over the pole on 9 May. Just three days later, none other than famed polar explorer Roald Amundsen flew over it in the airship Norge, dropping flags to mark the spot. It is now widely believed that Byrd never reached the pole, so it may, in fact, be that Amundsen was the first human being to reach both poles, as well as the first to traverse the Northwest Passage. In 1929, Byrd successfully flew over the South Pole—an undisputed first. The first people verified to have actually stood at the geographic North Pole were members of a Russian scientific expedition that were airlifted there in 1948. In 1958 the American submarine USS Nautilus passed directly under the North Pole, and in 1959 USS Skate broke through the ice and surfaced there.