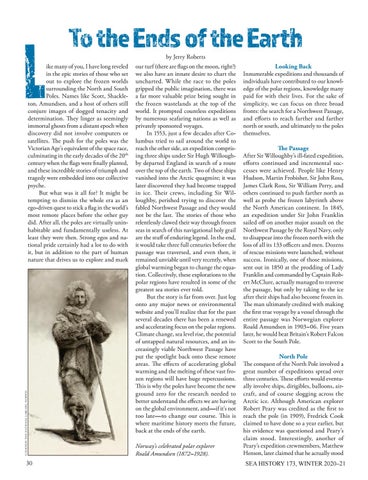 To the Ends of the Earth

ike many of you, I have long reveled in the epic stories of those who set out to explore the frozen worlds surrounding the North and South Poles. Names like Scott, Shackleton, Amundsen, and a host of others still conjure images of dogged tenacity and determination. They linger as seemingly immortal ghosts from a distant epoch when discovery did not involve computers or satellites. The push for the poles was the Victorian Age’s equivalent of the space race, culminating in the early decades of the 20th century when the flags were finally planted, and these incredible stories of triumph and tragedy were embedded into our collective psyche. But what was it all for? It might be tempting to dismiss the whole era as an ego-driven quest to stick a flag in the world’s most remote places before the other guy did. After all, the poles are virtually uninhabitable and fundamentally useless. At least they were then. Strong egos and national pride certainly had a lot to do with it, but in addition to the part of human nature that drives us to explore and mark

by Jerry Roberts our turf (there are flags on the moon, right?) we also have an innate desire to chart the uncharted. While the race to the poles gripped the public imagination, there was a far more valuable prize being sought in the frozen wastelands at the top of the world. It prompted countless expeditions by numerous seafaring nations as well as privately sponsored voyages. In 1553, just a few decades after Columbus tried to sail around the world to reach the other side, an expedition comprising three ships under Sir Hugh Willoughby departed England in search of a route over the top of the earth. Two of these ships vanished into the Arctic quagmire; it was later discovered they had become trapped in ice. Their crews, including Sir Willoughby, perished trying to discover the fabled Northwest Passage and they would not be the last. The stories of those who relentlessly clawed their way through frozen seas in search of this navigational holy grail are the stuff of enduring legend. In the end, it would take three full centuries before the passage was traversed, and even then, it remained unviable until very recently, when global warming began to change the equation. Collectively, these explorations to the polar regions have resulted in some of the greatest sea stories ever told. But the story is far from over. Just log onto any major news or environmental website and you’ll realize that for the past several decades there has been a renewed and accelerating focus on the polar regions. Climate change, sea level rise, the potential of untapped natural resources, and an increasingly viable Northwest Passage have put the spotlight back onto these remote areas. The effects of accelerating global warming and the melting of these vast frozen regions will have huge repercussions. This is why the poles have become the new ground zero for the research needed to better understand the effects we are having on the global environment, and—if it’s not too late—to change our course. This is where maritime history meets the future, back at the ends of the earth. Norway’s celebrated polar explorer Roald Amundsen (1872–1928).

Looking Back Innumerable expeditions and thousands of individuals have contributed to our knowledge of the polar regions, knowledge many paid for with their lives. For the sake of simplicity, we can focus on three broad fronts: the search for a Northwest Passage, and efforts to reach farther and farther north or south, and ultimately to the poles themselves. The Passage After Sir Willoughby’s ill-fated expedition, efforts continued and incremental successes were achieved. People like Henry Hudson, Martin Frobisher, Sir John Ross, James Clark Ross, Sir William Perry, and others continued to push farther north as well as probe the frozen labyrinth above the North American continent. In 1845, an expedition under Sir John Franklin sailed off on another major assault on the Northwest Passage by the Royal Navy, only to disappear into the frozen north with the loss of all its 133 officers and men. Dozens of rescue missions were launched, without success. Ironically, one of those missions, sent out in 1850 at the prodding of Lady Franklin and commanded by Captain Robert McClure, actually managed to traverse the passage, but only by taking to the ice after their ships had also become frozen in. The man ultimately credited with making the first true voyage by a vessel through the entire passage was Norwegian explorer Roald Amundsen in 1903–06. Five years later, he would beat Britain’s Robert Falcon Scott to the South Pole. North Pole The conquest of the North Pole involved a great number of expeditions spread over three centuries. These efforts would eventually involve ships, dirigibles, balloons, aircraft, and of course slogging across the Arctic ice. Although American explorer Robert Peary was credited as the first to reach the pole (in 1909), Fredrick Cook claimed to have done so a year earlier, but his evidence was questioned and Peary’s claim stood. Interestingly, another of Peary’s expedition crewmembers, Matthew Henson, later claimed that he actually stood SEA HISTORY 173, WINTER 2020–21