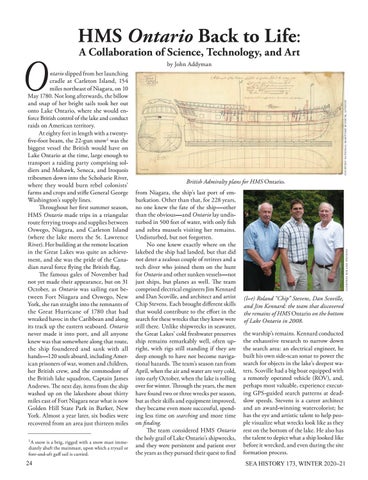 HMS Ontario Back to Life:

snow is a brig, rigged with a snow mast immediately abaft the mainmast, upon which a trysail or fore-and-aft gaff sail is carried.

ntario slipped from her launching cradle at Carleton Island, 154 miles northeast of Niagara, on 10 May 1780. Not long afterwards, the billow and snap of her bright sails took her out onto Lake Ontario, where she would enforce British control of the lake and conduct raids on American territory. At eighty feet in length with a twentyfive-foot beam, the 22-gun snow1 was the biggest vessel the British would have on Lake Ontario at the time, large enough to transport a raiding party comprising soldiers and Mohawk, Seneca, and Iroquois tribesmen down into the Schoharie River, where they would burn rebel colonists’ farms and crops and stifle General George Washington’s supply lines. Throughout her first summer season, HMS Ontario made trips in a triangular route ferrying troops and supplies between Oswego, Niagara, and Carleton Island (where the lake meets the St. Lawrence River). Her building at the remote location in the Great Lakes was quite an achievement, and she was the pride of the Canadian naval force flying the British flag. The famous gales of November had not yet made their appearance, but on 31 October, as Ontario was sailing east between Fort Niagara and Oswego, New York, she ran straight into the remnants of the Great Hurricane of 1780 that had wreaked havoc in the Caribbean and along its track up the eastern seaboard. Ontario never made it into port, and all anyone knew was that somewhere along that route, the ship foundered and sank with all hands—120 souls aboard, including American prisoners of war, women and children, her British crew, and the commodore of the British lake squadron, Captain James Andrews. The next day, items from the ship washed up on the lakeshore about thirty miles east of Fort Niagara near what is now Golden Hill State Park in Barker, New York. Almost a year later, six bodies were recovered from an area just thirteen miles

British Admiralty plans for HMS Ontario. from Niagara, the ship’s last port of embarkation. Other than that, for 228 years, no one knew the fate of the ship—other than the obvious—and Ontario lay undisturbed in 500 feet of water, with only fish and zebra mussels visiting her remains. Undisturbed, but not forgotten. No one knew exactly where on the lakebed the ship had landed, but that did not deter a zealous couple of retirees and a tech diver who joined them on the hunt for Ontario and other sunken vessels—not just ships, but planes as well. The team comprised electrical engineers Jim Kennard and Dan Scoville, and architect and artist Chip Stevens. Each brought different skills that would contribute to the effort in the search for these wrecks that they knew were still there. Unlike shipwrecks in seawater, the Great Lakes’ cold freshwater preserves ship remains remarkably well, often upright, with rigs still standing if they are deep enough to have not become navigational hazards. The team’s season ran from April, when the air and water are very cold, into early October, when the lake is rolling over for winter. Through the years, the men have found two or three wrecks per season, but as their skills and equipment improved, they became even more successful, spending less time on searching and more time on finding. The team considered HMS Ontario the holy grail of Lake Ontario’s shipwrecks, and they were persistent and patient over the years as they pursued their quest to find

A Collaboration of Science, Technology, and Art

(l–r) Roland “Chip” Stevens, Dan Scoville, and Jim Kennard: the team that discovered the remains of HMS Ontario on the bottom of Lake Ontario in 2008. the warship’s remains. Kennard conducted the exhaustive research to narrow down the search area: an electrical engineer, he built his own side-scan sonar to power the search for objects in the lake’s deepest waters. Scoville had a big boat equipped with a remotely operated vehicle (ROV), and, perhaps most valuable, experience executing GPS-guided search patterns at deadslow speeds. Stevens is a career architect and an award-winning watercolorist; he has the eye and artistic talent to help people visualize what wrecks look like as they rest on the bottom of the lake. He also has the talent to depict what a ship looked like before it wrecked, and even during the site formation process. SEA HISTORY 173, WINTER 2020–21