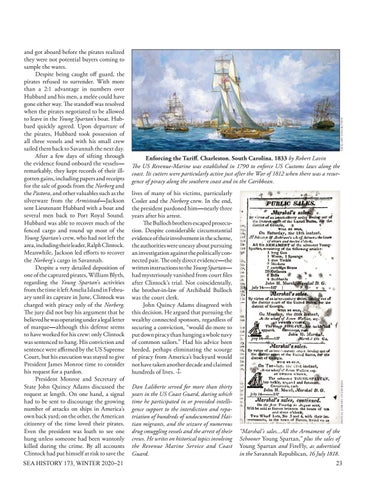 Enforcing the Tariff, Charleston, South Carolina, 1833 by Robert Lavin The US Revenue-Marine was established in 1790 to enforce US Customs laws along the coast. Its cutters were particularly active just after the War of 1812 when there was a resurgence of piracy along the southern coast and in the Caribbean. lives of many of his victims, particularly Cosler and the Norberg crew. In the end, the president pardoned him—nearly three years after his arrest. The Bulloch brothers escaped prosecution. Despite considerable circumstantial evidence of their involvement in the scheme, the authorities were uneasy about pursuing an investigation against the politically connected pair. The only direct evidence—the written instructions to the Young Spartan— had mysteriously vanished from court files after Clintock’s trial. Not coincidentally, the brother-in-law of Archibald Bulloch was the court clerk. John Quincy Adams disagreed with this decision. He argued that pursuing the wealthy connected sponsors, regardless of securing a conviction, “would do more to put down piracy than hanging a whole navy of common sailors.” Had his advice been heeded, perhaps eliminating the scourge of piracy from America’s backyard would not have taken another decade and claimed hundreds of lives. Dan Laliberte served for more than thirty years in the US Coast Guard, during which time he participated in or provided intelligence support to the interdiction and repatriation of hundreds of undocumented Haitian migrants, and the seizure of numerous drug smuggling vessels and the arrest of their crews. He writes on historical topics involving the Revenue Marine Service and Coast Guard.

and got aboard before the pirates realized they were not potential buyers coming to sample the wares. Despite being caught off guard, the pirates refused to surrender. With more than a 2:1 advantage in numbers over Hubbard and his men, a melée could have gone either way. The standoff was resolved when the pirates negotiated to be allowed to leave in the Young Spartan’s boat. Hubbard quickly agreed. Upon departure of the pirates, Hubbard took possession of all three vessels and with his small crew sailed them back to Savannah the next day. After a few days of sifting through the evidence found onboard the vessels— remarkably, they kept records of their illgotten gains, including papers and receipts for the sale of goods from the Norberg and the Pastora, and other valuables such as the silverware from the Armistead—Jackson sent Lieutenant Hubbard with a boat and several men back to Port Royal Sound. Hubbard was able to recover much of the fenced cargo and round up most of the Young Spartan’s crew, who had not left the area, including their leader, Ralph Clintock. Meanwhile, Jackson led efforts to recover the Norberg’s cargo in Savannah. Despite a very detailed deposition of one of the captured pirates, William Blyth, regarding the Young Spartan’s activities from the time it left Amelia Island in February until its capture in June, Clintock was charged with piracy only of the Norberg. The jury did not buy his argument that he believed he was operating under a legal letter of marque—although this defense seems to have worked for his crew: only Clintock was sentenced to hang. His conviction and sentence were affirmed by the US Supreme Court, but his execution was stayed to give President James Monroe time to consider his request for a pardon. President Monroe and Secretary of State John Quincy Adams discussed the request at length. On one hand, a signal had to be sent to discourage the growing number of attacks on ships in America’s own back yard; on the other, the American citizenry of the time loved their pirates. Even the president was loath to see one hung unless someone had been wantonly killed during the crime. By all accounts Clintock had put himself at risk to save the

“Marshal’s sales...All the Armament of the Schooner Young Spartan,” plus the sales of Young Spartan and FireFly, as advertised in the Savannah Republican, 16 July 1818.