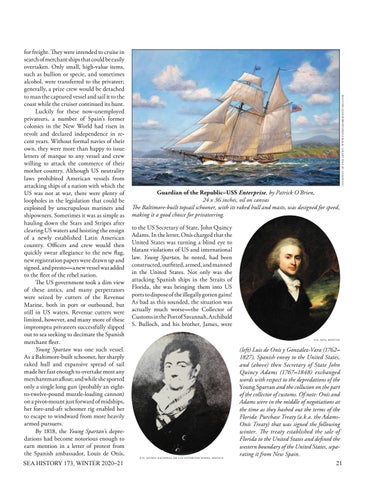 courtesy of the artist: www.patrickobrienstudio.com

for freight. They were intended to cruise in search of merchant ships that could be easily overtaken. Only small, high-value items, such as bullion or specie, and sometimes alcohol, were transferred to the privateer; generally, a prize crew would be detached to man the captured vessel and sail it to the coast while the cruiser continued its hunt. Luckily for these now-unemployed privateers, a number of Spain’s former colonies in the New World had risen in revolt and declared independence in recent years. Without formal navies of their own, they were more than happy to issue letters of marque to any vessel and crew willing to attack the commerce of their mother country. Although US neutrality laws prohibited American vessels from attacking ships of a nation with which the US was not at war, there were plenty of loopholes in the legislation that could be exploited by unscrupulous mariners and shipowners. Sometimes it was as simple as hauling down the Stars and Stripes after clearing US waters and hoisting the ensign of a newly established Latin American country. Officers and crew would then quickly swear allegiance to the new flag, new registration papers were drawn up and signed, and presto—a new vessel was added to the fleet of the rebel nation. The US government took a dim view of these antics, and many perpetrators were seized by cutters of the Revenue Marine, both in port or outbound, but still in US waters. Revenue cutters were limited, however, and many more of these impromptu privateers successfully slipped out to sea seeking to decimate the Spanish merchant fleet. Young Spartan was one such vessel. As a Baltimore-built schooner, her sharply raked hull and expansive spread of sail made her fast enough to overtake most any merchantman afloat; and while she sported only a single long gun (probably an eightto-twelve-pound muzzle-loading cannon) on a pivot-mount just forward of midships, her fore-and-aft schooner rig enabled her to escape to windward from more heavily armed pursuers. By 1818, the Young Spartan’s depredations had become notorious enough to earn mention in a letter of protest from the Spanish ambassador, Louis de Onís,

Guardian of the Republic–USS Enterprise, by Patrick O’Brien, 24 x 36 inches, oil on canvas The Baltimore-built topsail schooner, with its raked hull and masts, was designed for speed, making it a good choice for privateering. to the US Secretary of State, John Quincy Adams. In the letter, Onís charged that the United States was turning a blind eye to blatant violations of US and international law. Young Spartan, he noted, had been constructed, outfitted, armed, and manned in the United States. Not only was she attacking Spanish ships in the Straits of Florida, she was bringing them into US ports to dispose of the illegally gotten gains! As bad as this sounded, the situation was actually much worse—the Collector of Customs in the Port of Savannah, Archibald S. Bulloch, and his brother, James, were p.d. mfa, boston

(left) Luis de Onís y González-Vara (1762– 1827), Spanish envoy to the United States, and (above) then Secretary of State John Quincy Adams (1767–1848) exchanged words with respect to the depredations of the Young Spartan and the collusion on the part of the collector of customs. Of note: Onís and Adams were in the middle of negotiations at the time as they hashed out the terms of the Florida Purchase Treaty (a.k.a. the AdamsOnís Treaty) that was signed the following winter. The treaty established the sale of Florida to the United States and defined the western boundary of the United States, separating it from New Spain.