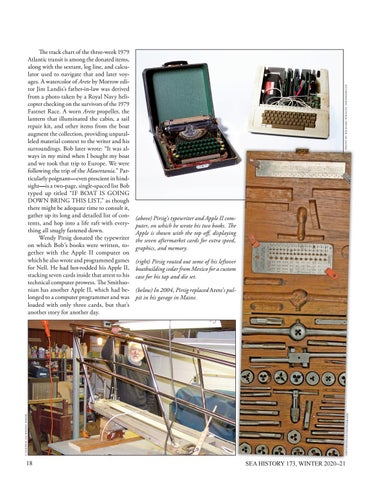 (above) Pirsig’s typewriter and Apple II computer, on which he wrote his two books. The Apple is shown with the top off, displaying the seven aftermarket cards for extra speed, graphics, and memory. (right) Pirsig routed out some of his leftover boatbuilding cedar from Mexico for a custom case for his tap and die set. (below) In 2004, Pirsig replaced Arete’s pulpit in his garage in Maine.

The track chart of the three-week 1979 Atlantic transit is among the donated items, along with the sextant, log line, and calculator used to navigate that and later voyages. A watercolor of Arete by Morrow editor Jim Landis’s father-in-law was derived from a photo taken by a Royal Navy helicopter checking on the survivors of the 1979 Fastnet Race. A worn Arete propeller, the lantern that illuminated the cabin, a sail repair kit, and other items from the boat augment the collection, providing unparalleled material context to the writer and his surroundings. Bob later wrote: “It was always in my mind when I bought my boat and we took that trip to Europe. We were following the trip of the Mauretania.” Particularly poignant—even prescient in hindsight—is a two-page, single-spaced list Bob typed up titled “IF BOAT IS GOING DOWN BRING THIS LIST,” as though there might be adequate time to consult it, gather up its long and detailed list of contents, and hop into a life raft with everything all snugly fastened down. Wendy Pirsig donated the typewriter on which Bob’s books were written, together with the Apple II computer on which he also wrote and programmed games for Nell. He had hot-rodded his Apple II, stacking seven cards inside that attest to his technical computer prowess. The Smithsonian has another Apple II, which had belonged to a computer programmer and was loaded with only three cards, but that’s another story for another day.