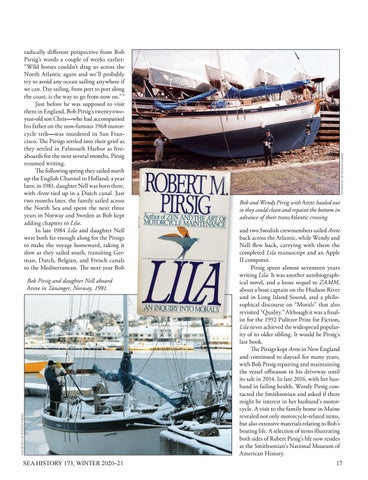 Bob Pirsig and daughter Nell aboard Arete in Tananger, Norway, 1981.

radically different perspective from Bob Pirsig’s words a couple of weeks earlier: “Wild horses couldn’t drag us across the North Atlantic again and we’ll probably try to avoid any ocean sailing anywhere if we can. Day sailing, from port to port along the coast, is the way to go from now on.” 9 Just before he was supposed to visit them in England, Bob Pirsig’s twenty-twoyear-old son Chris—who had accompanied his father on the now-famous 1968 motorcycle trek—was murdered in San Francisco. The Pirsigs settled into their grief as they settled in Falmouth Harbor as liveaboards for the next several months. Pirsig resumed writing. The following spring they sailed north up the English Channel to Holland; a year later, in 1981, daughter Nell was born there, with Arete tied up in a Dutch canal. Just two months later, the family sailed across the North Sea and spent the next three years in Norway and Sweden as Bob kept adding chapters to Lila. In late 1984 Lila and daughter Nell were both far enough along for the Pirsigs to make the voyage homeward, taking it slow as they sailed south, transiting German, Dutch, Belgian, and French canals to the Mediterranean. The next year Bob

Bob and Wendy Pirsig with Arete hauled out so they could clean and repaint the bottom in advance of their transAtlantic crossing. and two Swedish crewmembers sailed Arete back across the Atlantic, while Wendy and Nell flew back, carrying with them the completed Lila manuscript and an Apple II computer. Pirsig spent almost seventeen years writing Lila. It was another autobiographical novel, and a loose sequel to ZAMM, about a boat captain on the Hudson River and in Long Island Sound, and a philosophical discourse on “Morals” that also revisited “Quality.” Although it was a finalist for the 1992 Pulitzer Prize for Fiction, Lila never achieved the widespread popularity of its older sibling. It would be Pirsig’s last book. The Pirsigs kept Arete in New England and continued to daysail for many years, with Bob Pirsig repairing and maintaining the vessel offseason in his driveway until its sale in 2014. In late 2016, with her husband in failing health, Wendy Pirsig contacted the Smithsonian and asked if there might be interest in her husband’s motorcycle. A visit to the family home in Maine revealed not only motorcycle-related items, but also extensive materials relating to Bob’s boating life. A selection of items illustrating both sides of Robert Pirsig’s life now resides at the Smithsonian’s National Museum of American History.