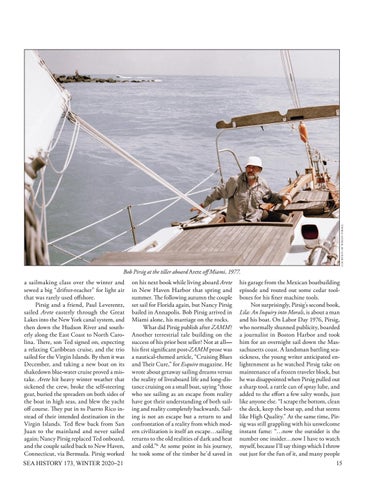 Bob Pirsig at the tiller aboard Arete off Miami, 1977. a sailmaking class over the winter and sewed a big “drifter-reacher” for light air that was rarely used offshore. Pirsig and a friend, Paul Leverentz, sailed Arete easterly through the Great Lakes into the New York canal system, and then down the Hudson River and southerly along the East Coast to North Carolina. There, son Ted signed on, expecting a relaxing Caribbean cruise, and the trio sailed for the Virgin Islands. By then it was December, and taking a new boat on its shakedown blue-water cruise proved a mistake. Arete hit heavy winter weather that sickened the crew, broke the self-steering gear, buried the spreaders on both sides of the boat in high seas, and blew the yacht off course. They put in to Puerto Rico instead of their intended destination in the Virgin Islands. Ted flew back from San Juan to the mainland and never sailed again; Nancy Pirsig replaced Ted onboard, and the couple sailed back to New Haven, Connecticut, via Bermuda. Pirsig worked

on his next book while living aboard Arete in New Haven Harbor that spring and summer. The following autumn the couple set sail for Florida again, but Nancy Pirsig bailed in Annapolis. Bob Pirsig arrived in Miami alone, his marriage on the rocks. What did Pirsig publish after ZAMM? Another terrestrial tale building on the success of his prior best seller? Not at all— his first significant post-ZAMM prose was a nautical-themed article, “Cruising Blues and Their Cure,” for Esquire magazine. He wrote about getaway sailing dreams versus the reality of liveaboard life and long-distance cruising on a small boat, saying “those who see sailing as an escape from reality have got their understanding of both sailing and reality completely backwards. Sailing is not an escape but a return to and confrontation of a reality from which modern civilization is itself an escape…sailing returns to the old realities of dark and heat and cold.”6 At some point in his journey, he took some of the timber he’d saved in

his garage from the Mexican boatbuilding episode and routed out some cedar toolboxes for his finer machine tools. Not surprisingly, Pirsig’s second book, Lila: An Inquiry into Morals, is about a man and his boat. On Labor Day 1976, Pirsig, who normally shunned publicity, boarded a journalist in Boston Harbor and took him for an overnight sail down the Massachusetts coast. A landsman battling seasickness, the young writer anticipated enlightenment as he watched Pirsig take on maintenance of a frozen traveler block, but he was disappointed when Pirsig pulled out a sharp tool, a rattle can of spray lube, and added to the effort a few salty words, just like anyone else. “I scrape the bottom, clean the deck, keep the boat up, and that seems like High Quality.” At the same time, Pirsig was still grappling with his unwelcome instant fame: “…now the outsider is the number one insider…now I have to watch myself, because I’ll say things which I throw out just for the fun of it, and many people