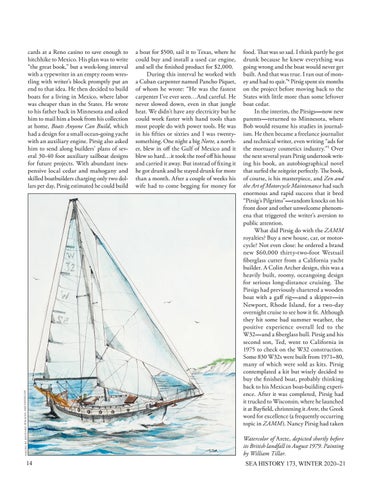 cards at a Reno casino to save enough to hitchhike to Mexico. His plan was to write “the great book,” but a week-long interval with a typewriter in an empty room wrestling with writer’s block promptly put an end to that idea. He then decided to build boats for a living in Mexico, where labor was cheaper than in the States. He wrote to his father back in Minnesota and asked him to mail him a book from his collection at home, Boats Anyone Can Build, which had a design for a small ocean-going yacht with an auxiliary engine. Pirsig also asked him to send along builders’ plans of several 30-40 foot auxiliary sailboat designs for future projects. With abundant inexpensive local cedar and mahogany and skilled boatbuilders charging only two dollars per day, Pirsig estimated he could build

a boat for $500, sail it to Texas, where he could buy and install a used car engine, and sell the finished product for $2,000. During this interval he worked with a Cuban carpenter named Pancho Piquet, of whom he wrote: “He was the fastest carpenter I’ve ever seen…And careful. He never slowed down, even in that jungle heat. We didn’t have any electricity but he could work faster with hand tools than most people do with power tools. He was in his fifties or sixties and I was twentysomething. One night a big Norte, a norther, blew in off the Gulf of Mexico and it blew so hard…it took the roof off his house and carried it away. But instead of fixing it he got drunk and he stayed drunk for more than a month. After a couple of weeks his wife had to come begging for money for

food. That was so sad. I think partly he got drunk because he knew everything was going wrong and the boat would never get built. And that was true. I ran out of money and had to quit.”4 Pirsig spent six months on the project before moving back to the States with little more than some leftover boat cedar. In the interim, the Pirsigs—now new parents—returned to Minnesota, where Bob would resume his studies in journalism. He then became a freelance journalist and technical writer, even writing “ads for the mortuary cosmetics industry.”5 Over the next several years Pirsig undertook writing his book, an autobiographical novel that surfed the zeitgeist perfectly. The book, of course, is his masterpiece, and Zen and the Art of Motorcycle Maintenance had such enormous and rapid success that it bred “Pirsig’s Pilgrims”—random knocks on his front door and other unwelcome phenomena that triggered the writer’s aversion to public attention. What did Pirsig do with the ZAMM royalties? Buy a new house, car, or motorcycle? Not even close: he ordered a brand new $60,000 thirty-two-foot Westsail fiberglass cutter from a California yacht builder. A Colin Archer design, this was a heavily built, roomy, oceangoing design for serious long-distance cruising. The Pirsigs had previously chartered a wooden boat with a gaff rig—and a skipper—in Newport, Rhode Island, for a two-day overnight cruise to see how it fit. Although they hit some bad summer weather, the positive experience overall led to the W32—and a fiberglass hull. Pirsig and his second son, Ted, went to California in 1975 to check on the W32 construction. Some 830 W32s were built from 1971–80, many of which were sold as kits. Pirsig contemplated a kit but wisely decided to buy the finished boat, probably thinking back to his Mexican boat-building experience. After it was completed, Pirsig had it trucked to Wisconsin, where he launched it at Bayfield, christening it Arete, the Greek word for excellence (a frequently occurring topic in ZAMM). Nancy Pirsig had taken Watercolor of Arete, depicted shortly before its British landfall in August 1979. Painting by William Tillar. SEA HISTORY 173, WINTER 2020–21