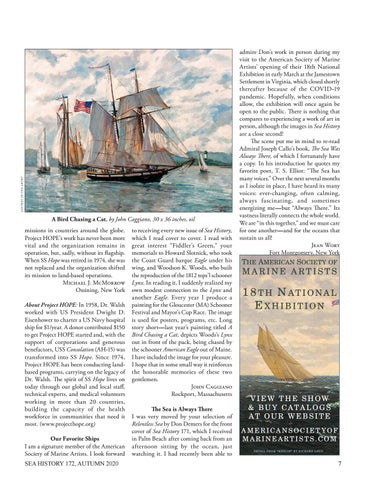 coutesy of the artist

A Bird Chasing a Cat, by John Caggiano, 30 x 36 inches, oil missions in countries around the globe. Project HOPE’s work has never been more vital and the organization remains in operation, but, sadly, without its flagship. When SS Hope was retired in 1974, she was not replaced and the organization shifted its mission to land-based operations. Michael J. McMorrow Ossining, New York About Project HOPE: In 1958, Dr. Walsh worked with US President Dwight D. Eisenhower to charter a US Navy hospital ship for $1/year. A donor contributed $150 to get Project HOPE started and, with the support of corporations and generous benefactors, USS Consolation (AH-15) was transformed into SS Hope. Since 1974, Project HOPE has been conducting landbased programs, carrying on the legacy of Dr. Walsh. The spirit of SS Hope lives on today through our global and local staff, technical experts, and medical volunteers working in more than 20 countries, building the capacity of the health workforce in communities that need it most. (www.projecthope.org) Our Favorite Ships I am a signature member of the American Society of Marine Artists. I look forward

to receiving every new issue of Sea History, which I read cover to cover. I read with great interest “Fiddler’s Green,” your memorials to Howard Slotnick, who took the Coast Guard barque Eagle under his wing, and Woodson K. Woods, who built the reproduction of the 1812 tops’l schooner Lynx. In reading it, I suddenly realized my own modest connection to the Lynx and another Eagle. Every year I produce a painting for the Gloucester (MA) Schooner Festival and Mayor’s Cup Race. The image is used for posters, programs, etc. Long story short—last year’s painting titled A Bird Chasing a Cat, depicts Woods’s Lynx out in front of the pack, being chased by the schooner American Eagle out of Maine. I have included the image for your pleasure. I hope that in some small way it reinforces the honorable memories of these two gentlemen. John Caggiano Rockport, Massachusetts The Sea is Always There I was very moved by your selection of Relentless Sea by Don Demers for the front cover of Sea History 171, which I received in Palm Beach after coming back from an afternoon sitting by the ocean, just watching it. I had recently been able to

admire Don’s work in person during my visit to the American Society of Marine Artists’ opening of their 18th National Exhibition in early March at the Jamestown Settlement in Virginia, which closed shortly thereafter because of the COVID-19 pandemic. Hopefully, when conditions allow, the exhibition will once again be open to the public. There is nothing that compares to experiencing a work of art in person, although the images in Sea History are a close second! The scene put me in mind to re-read Admiral Joseph Callo’s book, The Sea Was Always There, of which I fortunately have a copy. In his introduction he quotes my favorite poet, T. S. Elliot: “The Sea has many voices.” Over the next several months as I isolate in place, I have heard its many voices: ever-changing, often calming, always fascinating, and sometimes energizing me—but “Always There.” Its vastness literally connects the whole world. We are “in this together,” and we must care for one another—and for the oceans that sustain us all! Jean Wort Fort Montgomery, New York

THE AMERICAN SOCIETY OF