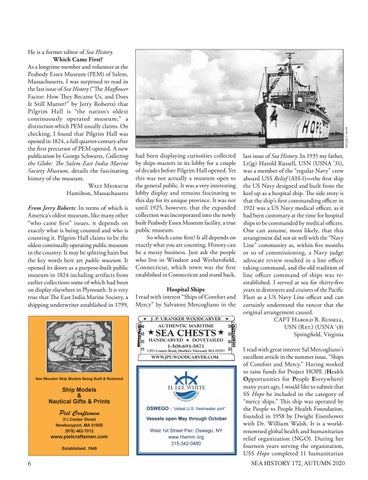 From Jerry Roberts: In terms of which is America’s oldest museum, like many other “who came first” issues, it depends on exactly what is being counted and who is counting it. Pilgrim Hall claims to be the oldest continually operating public museum in the country. It may be splitting hairs but the key words here are public museum. It opened its doors as a purpose-built public museum in 1824 including artifacts from earlier collections some of which had been on display elsewhere in Plymouth. It is very true that The East India Marine Society, a shipping underwriter established in 1799,

He is a former editor of Sea History. Which Came First? As a longtime member and volunteer at the Peabody Essex Museum (PEM) of Salem, Massachusetts, I was surprised to read in the last issue of Sea History (“The Mayflower Factor: How They Became Us, and Does It Still Matter?” by Jerry Roberts) that Pilgrim Hall is “the nation’s oldest continuously operated museum,” a distinction which PEM usually claims. On checking, I found that Pilgrim Hall was opened in 1824, a full quarter-century after the first precursor of PEM opened. A new publication by George Schwartz, Collecting the Globe: The Salem East India Marine Society Museum, details the fascinating history of the museum. Walt Meibaum Hamilton, Massachusetts

had been displaying curiosities collected by ships masters in its lobby for a couple of decades before Pilgrim Hall opened. Yet this was not actually a museum open to the general public. It was a very interesting lobby display and remains fascinating to this day for its unique province. It was not until 1925, however, that the expanded collection was incorporated into the newly built Peabody Essex Museum facility, a true public museum. So which came first? It all depends on exactly what you are counting. History can be a messy business. Just ask the people who live in Windsor and Wethersfield, Connecticut, which town was the first established in Connecticut and stand back. Hospital Ships I read with interest “Ships of Comfort and Mercy” by Salvatore Mercogliano in the

last issue of Sea History. In 1935 my father, Lt(jg) Harold Russell, USN (USNA ’31), was a member of the “regular Navy” crew aboard USS Relief (AH-1)—the first ship the US Navy designed and built from the keel up as a hospital ship. The side story is that the ship’s first commanding officer in 1921 was a US Navy medical officer, as it had been customary at the time for hospital ships to be commanded by medical officers. One can assume, most likely, that this arrangement did not sit well with the “Navy Line” community as, within five months or so of commissioning, a Navy judge advocate review resulted in a line officer taking command, and the old tradition of line officer command of ships was reestablished. I served at sea for thirty-five years in destroyers and cruisers of the Pacific Fleet as a US Navy Line officer and can certainly understand the rancor that the original arrangement caused. CAPT Harold B. Russell, USN (Ret.) (USNA ‘58) Springfield, Virginia I read with great interest Sal Mercogliano’s excellent article in the summer issue, “Ships of Comfort and Mercy.” Having worked to raise funds for Project HOPE (Health Opportunities for People Everywhere) many years ago, I would like to submit that SS Hope be included in the category of “mercy ships.” This ship was operated by the People to People Health Foundation, founded in 1958 by Dwight Eisenhower with Dr. William Walsh. It is a worldrenowned global health and humanitarian relief organization (NGO). During her fourteen years serving the organization, USS Hope completed 11 humanitarian