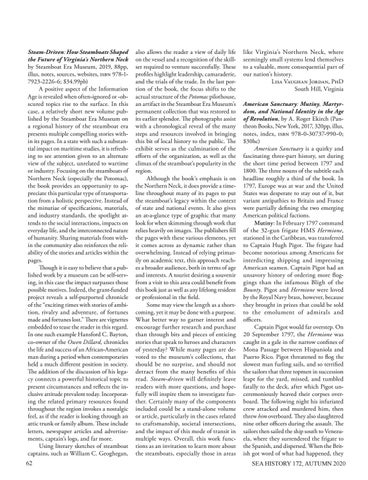 Steam-Driven: How Steamboats Shaped the Future of Virginia’s Northern Neck by Steamboat Era Museum, 2019, 88pp, illus, notes, sources, websites, isbn 978-17923-2226-6; $34.99pb) A positive aspect of the Information Age is revealed when often-ignored or -obscured topics rise to the surface. In this case, a relatively short new volume published by the Steamboat Era Museum on a regional history of the steamboat era presents multiple compelling stories within its pages. In a state with such a substantial impact on maritime studies, it is refreshing to see attention given to an alternate view of the subject, unrelated to wartime or industry. Focusing on the steamboats of Northern Neck (especially the Potomac), the book provides an opportunity to appreciate this particular type of transportation from a holistic perspective. Instead of the minutiae of specifications, materials, and industry standards, the spotlight attends to the social interactions, impacts on everyday life, and the interconnected nature of humanity. Sharing materials from within the community also reinforces the reliability of the stories and articles within the pages. Though it is easy to believe that a published work by a museum can be self-serving, in this case the impact surpasses those possible motives. Indeed, the grant-funded project reveals a self-purported chronicle of the “exciting times with stories of ambition, rivalry and adventure, of fortunes made and fortunes lost.” There are vignettes embedded to tease the reader in this regard. In one such example Hansford C. Bayton, co-owner of the Owen Dillard, chronicles the life and success of an African-American man during a period when contemporaries held a much different position in society. The addition of the discussion of his legacy connects a powerful historical topic to present circumstances and reflects the inclusive attitude prevalent today. Incorporating the related primary resources found throughout the region invokes a nostalgic feel, as if the reader is looking through an attic trunk or family album. These include letters, newspaper articles and advertisements, captain’s logs, and far more. Using literary sketches of steamboat captains, such as William C. Geoghegan, 62

also allows the reader a view of daily life on the vessel and a recognition of the skillset required to venture successfully. These profiles highlight leadership, camaraderie, and the trials of the trade. In the last portion of the book, the focus shifts to the actual structure of the Potomac pilothouse, an artifact in the Steamboat Era Museum’s permanent collection that was restored to its earlier splendor. The photographs assist with a chronological reveal of the many steps and resources involved in bringing this bit of local history to the public. The exhibit serves as the culmination of the efforts of the organization, as well as the climax of the steamboat’s popularity in the region. Although the book’s emphasis is on the Northern Neck, it does provide a timeline throughout many of its pages to put the steamboat’s legacy within the context of state and national events. It also gives an at-a-glance type of graphic that many look for when skimming through work that relies heavily on images. The publishers fill the pages with these various elements, yet it comes across as dynamic rather than overwhelming. Instead of relying primarily on academic text, this approach reaches a broader audience, both in terms of age and interests. A tourist desiring a souvenir from a visit to this area could benefit from this book just as well as any lifelong resident or professional in the field. Some may view the length as a shortcoming, yet it may be done with a purpose. What better way to garner interest and encourage further research and purchase than through bits and pieces of enticing stories that speak to heroes and characters of yesterday? While many pages are devoted to the museum’s collections, that should be no surprise, and should not detract from the many benefits of this read. Steam-driven will definitely leave readers with more questions, and hopefully will inspire them to investigate further. Certainly many of the components included could be a stand-alone volume or article, particularly in the cases related to craftsmanship, societal intersections, and the impact of this mode of transit in multiple ways. Overall, this work functions as an invitation to learn more about the steamboats, especially those in areas

like Virginia’s Northern Neck, where seemingly small systems lend themselves to a valuable, more consequential part of our nation’s history. Lisa Vaughan Jordan, PhD South Hill, Virginia American Sanctuary: Mutiny, Martyrdom, and National Identity in the Age of Revolution, by A. Roger Ekirch (Pantheon Books, New York, 2017, 320pp, illus, notes, index, isbn 978-0-30737-990-0; $30hc) American Sanctuary is a quirky and fascinating three-part history, set during the short time period between 1797 and 1800. The three nouns of the subtitle each headline roughly a third of the book. In 1797, Europe was at war and the United States was desperate to stay out of it, but variant antipathies to Britain and France were partially defining the two emerging American political factions. Mutiny: In February 1797 command of the 32-gun frigate HMS Hermione, stationed in the Caribbean, was transferred to Captain Hugh Pigot. The frigate had become notorious among Americans for interdicting shipping and impressing American seamen. Captain Pigot had an unsavory history of ordering more floggings than the infamous Bligh of the Bounty. Pigot and Hermione were loved by the Royal Navy brass, however, because they brought in prizes that could be sold to the emolument of admirals and officers. Captain Pigot would far overstep. On 20 September 1797, the Hermione was caught in a gale in the narrow confines of Mona Passage between Hispaniola and Puerto Rico. Pigot threatened to flog the slowest man furling sails, and so terrified the sailors that three topmen in succession leapt for the yard, missed, and tumbled fatally to the deck, after which Pigot unceremoniously heaved their corpses overboard. The following night his infuriated crew attacked and murdered him, then threw him overboard. They also slaughtered nine other officers during the assault. The sailors then sailed the ship south to Venezuela, where they surrendered the frigate to the Spanish, and dispersed. When the British got word of what had happened, they SEA HISTORY 172, AUTUMN 2020