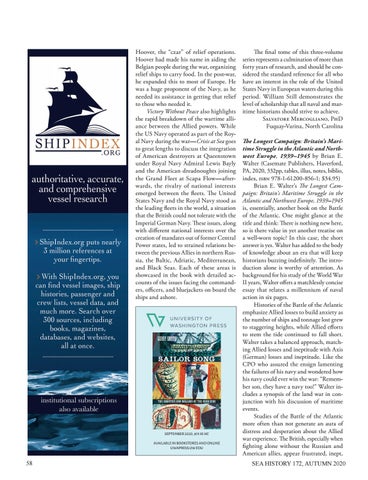 Hoover, the “czar” of relief operations. Hoover had made his name in aiding the Belgian people during the war, organizing relief ships to carry food. In the post-war, he expanded this to most of Europe. He was a huge proponent of the Navy, as he needed its assistance in getting that relief to those who needed it. Victory Without Peace also highlights the rapid breakdown of the wartime alliance between the Allied powers. While the US Navy operated as part of the Royal Navy during the war—Crisis at Sea goes to great lengths to discuss the integration of American destroyers at Queenstown under Royal Navy Admiral Lewis Bayly and the American dreadnoughts joining the Grand Fleet at Scapa Flow—afterwards, the rivalry of national interests emerged between the fleets. The United States Navy and the Royal Navy stood as the leading fleets in the world, a situation that the British could not tolerate with the Imperial German Navy. These issues, along with different national interests over the creation of mandates out of former Central Power states, led to strained relations between the previous Allies in northern Russia, the Baltic, Adriatic, Mediterranean, and Black Seas. Each of these areas is showcased in the book with detailed accounts of the issues facing the commanders, officers, and bluejackets on board the ships and ashore.

The final tome of this three-volume series represents a culmination of more than forty years of research, and should be considered the standard reference for all who have an interest in the role of the United States Navy in European waters during this period. William Still demonstrates the level of scholarship that all naval and maritime historians should strive to achieve. Salvatore Mercogliano, PhD Fuquay-Varina, North Carolina The Longest Campaign: Britain’s Maritime Struggle in the Atlantic and Northwest Europe, 1939–1945 by Brian E. Walter (Casemate Publishers, Haverford, PA, 2020, 332pp, tables, illus, notes, biblio, index, isbn 978-1-61200-856-1; $34.95) Brian E. Walter’s The Longest Campaign: Britain’s Maritime Struggle in the Atlantic and Northwest Europe, 1939–1945 is, essentially, another book on the Battle of the Atlantic. One might glance at the title and think: There is nothing new here, so is there value in yet another treatise on a well-worn topic? In this case, the short answer is yes. Walter has added to the body of knowledge about an era that will keep historians buzzing indefinitely. The introduction alone is worthy of attention. As background for his study of the World War II years, Walter offers a matchlessly concise essay that relates a millennium of naval action in six pages. Histories of the Battle of the Atlantic emphasize Allied losses to build anxiety as the number of ships and tonnage lost grew to staggering heights, while Allied efforts to stem the tide continued to fall short. Walter takes a balanced approach, matching Allied losses and ineptitude with Axis (German) losses and ineptitude. Like the CPO who assured the ensign lamenting the failures of his navy and wondered how his navy could ever win the war: “Remember son, they have a navy too!” Walter includes a synopsis of the land war in conjunction with his discussion of maritime events. Studies of the Battle of the Atlantic more often than not generate an aura of distress and desperation about the Allied war experience. The British, especially when fighting alone without the Russian and American allies, appear frustrated, inept, SEA HISTORY 172, AUTUMN 2020