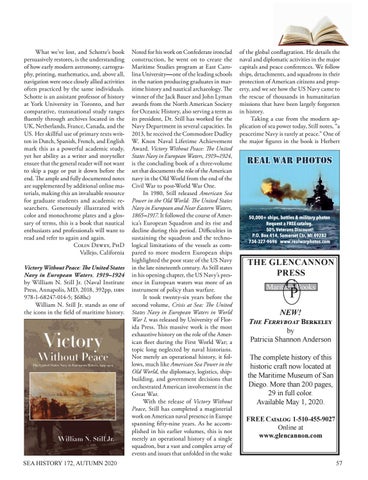 What we’ve lost, and Schotte’s book persuasively restores, is the understanding of how early modern astronomy, cartography, printing, mathematics, and, above all, navigation were once closely allied activities often practiced by the same individuals. Schotte is an assistant professor of history at York University in Toronto, and her comparative, transnational study ranges fluently through archives located in the UK, Netherlands, France, Canada, and the US. Her skillful use of primary texts written in Dutch, Spanish, French, and English mark this as a powerful academic study, yet her ability as a writer and storyteller ensure that the general reader will not want to skip a page or put it down before the end. The ample and fully documented notes are supplemented by additional online materials, making this an invaluable resource for graduate students and academic researchers. Generously illustrated with color and monochrome plates and a glossary of terms, this is a book that nautical enthusiasts and professionals will want to read and refer to again and again. Colin Dewey, PhD Vallejo, California Victory Without Peace: The United States Navy in European Waters, 1919–1924 by William N. Still Jr. (Naval Institute Press, Annapolis, MD, 2018, 392pp, isbn 978-1-68247-014-5; $68hc) William N. Still Jr. stands as one of the icons in the field of maritime history.

Noted for his work on Confederate ironclad of the global conflagration. He details the construction, he went on to create the naval and diplomatic activities in the major Maritime Studies program at East Caro- capitals and peace conferences. We follow lina University—one of the leading schools ships, detachments, and squadrons in their in the nation producing graduates in mar- protection of American citizens and propitime history and nautical archaeology. The erty, and we see how the US Navy came to winner of the Jack Bauer and John Lyman the rescue of thousands in humanitarian awards from the North American Society missions that have been largely forgotten for Oceanic History, also serving a term as in history. its president, Dr. Still has worked for the Taking a cue from the modern apNavy Department in several capacities. In plication of sea power today, Still notes, “a 2013, he received the Commodore Dudley peacetime Navy is rarely at peace.” One of W. Knox Naval Lifetime Achievement the major figures in the book is Herbert Award. Victory Without Peace: The United States Navy in European Waters, 1919–1924, REAL WAR PHOTOS is the concluding book of a three-volume set that documents the role of the American navy in the Old World from the end of the The Glencannon Press Civil War to post-World War One. col. inches (2.25 In 1980, Still4 released American Seax 4.5 inches) PreferThe right hand page, bottom right. Power in the Old World: United States Navy in European and Near Eastern Waters, 1865–1917. It followed the course of Amer50,000+ ships, battles & military photos ica’s European Squadron and its rise and Request a FREE catalog. 50% Veterans Discount! decline during this period. Difficulties in P.O. Box 414, Somerset Ctr, MI 49282 sustaining the squadron and the techno734-327-9696 www.realwarphotos.com logical limitations of the vessels as compared to more modern European ships highlighted the poor state of the US Navy THE Real War Photos Ad.indd GLENCANNON 1 4/10/2018 08:08:10 in the late nineteenth century. As Still states PRESS in his opening chapter, the US Navy’s presence in European waters was more of an Maritime Books instrument of policy than warfare. It took twenty-six years before the second volume, Crisis at Sea: The United States Navy in European Waters in World NEW! War I, was released by University of FlorThe Ferryboat Berkeley ida Press. This massive work is the most by exhaustive history on the role of the AmerPatricia Shannon Anderson ican fleet during the First World War; a topic long neglected by naval historians. Not merely an operational history, it folThe complete history of this lows, much like American Sea Power in the historic craft now located at Old World, the diplomacy, logistics, shipthe Maritime Museum of San building, and government decisions that Diego. More than 200 pages, orchestrated American involvement in the 29 in full color. Great War. With the release of Victory Without Available May 1, 2020. Peace, Still has completed a magisterial work on American naval presence in Europe FREE Catalog 1-510-455-9027 spanning fifty-nine years. As he accomOnline at plished in his earlier volumes, this is not www.glencannon.com merely an operational history of a single squadron, but a vast and complex array of events and issues that unfolded in the wake