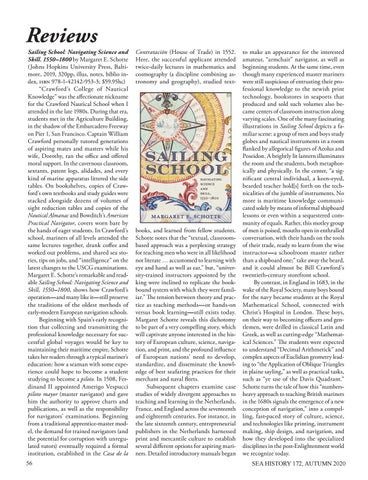 Sailing School: Navigating Science and Skill, 1550–1800 by Margaret E. Schotte (Johns Hopkins University Press, Baltimore, 2019, 320pp, illus, notes, biblio index, isbn 978-1-42142-953-3; $59.95hc) “Crawford’s College of Nautical Knowledge” was the affectionate nickname for the Crawford Nautical School when I attended in the late 1980s. During that era, students met in the Agriculture Building, in the shadow of the Embarcadero Freeway on Pier 1, San Francisco. Captain William Crawford personally tutored generations of aspiring mates and masters while his wife, Dorothy, ran the office and offered moral support. In the cavernous classroom, sextants, patent logs, alidades, and every kind of marine apparatus littered the side tables. On bookshelves, copies of Crawford’s own textbooks and study guides were stacked alongside dozens of volumes of sight reduction tables and copies of the Nautical Almanac and Bowditch’s American Practical Navigator, covers worn bare by the hands of eager students. In Crawford’s school, mariners of all levels attended the same lectures together, drank coffee and worked out problems, and shared sea stories, tips on jobs, and “intelligence” on the latest changes to the USCG examinations. Margaret E. Schotte’s remarkable and readable Sailing School: Navigating Science and Skill, 1550–1800, shows how Crawford’s operation—and many like it—still preserve the traditions of the oldest methods of early-modern European navigation schools. Beginning with Spain’s early recognition that collecting and transmitting the professional knowledge necessary for successful global voyages would be key to maintaining their maritime empire, Schotte takes her readers through a typical mariner’s education: how a seaman with some experience could hope to become a student studying to become a piloto. In 1508, Ferdinand II appointed Amerigo Vespucci piloto mayor (master navigator) and gave him the authority to approve charts and publications, as well as the responsibility for navigators’ examinations. Beginning from a traditional apprentice-master model, the demand for trained navigators (and the potential for corruption with unregulated tutors) eventually required a formal institution, established in the Casa de la

books, and learned from fellow students. Schotte notes that the “textual, classroombased approach was a perplexing strategy for teaching men who were in all likelihood not literate … accustomed to learning with eye and hand as well as ear,” but, “university-trained instructors appointed by the king were inclined to replicate the bookbound system with which they were familiar.” The tension between theory and practice as teaching methods—or hands-on versus book learning—still exists today. Margaret Schotte reveals this dichotomy to be part of a very compelling story, which will captivate anyone interested in the history of European culture, science, navigation, and print, and the profound influence of European nations’ need to develop, standardize, and disseminate the knowledge of best seafaring practices for their merchant and naval fleets. Subsequent chapters examine case studies of widely divergent approaches to teaching and learning in the Netherlands, France, and England across the seventeenth and eighteenth centuries. For instance, in the late sixteenth century, entrepreneurial publishers in the Netherlands harnessed print and mercantile culture to establish several different options for aspiring mariners. Detailed introductory manuals began

to make an appearance for the interested amateur, “armchair” navigator, as well as beginning students. At the same time, even though many experienced master mariners were still suspicious of entrusting their professional knowledge to the newish print technology, bookstores in seaports that produced and sold such volumes also became centers of classroom instruction along varying scales. One of the many fascinating illustrations in Sailing School depicts a familiar scene: a group of men and boys study globes and nautical instruments in a room flanked by allegorical figures of Aeolus and Poseidon. A brightly lit lantern illuminates the room and the students, both metaphorically and physically. In the center, “a significant central individual, a keen-eyed, bearded teacher hold[s] forth on the technicalities of the jumble of instruments. No more is maritime knowledge communicated solely by means of informal shipboard lessons or even within a sequestered community of equals. Rather, this motley group of men is poised, mouths open in enthralled conversation, with their hands on the tools of their trade, ready to learn from the wise instructor—a schoolroom master rather than a shipboard one;” take away the beard, and it could almost be Bill Crawford’s twentieth-century storefront school. By contrast, in England in 1683, in the wake of the Royal Society, many boys bound for the navy became students at the Royal Mathematical School, connected with Christ’s Hospital in London. These boys, on their way to becoming officers and gentlemen, were drilled in classical Latin and Greek, as well as cutting-edge “Mathematical Sciences.” The students were expected to understand “Decimal Arithmetick” and complex aspects of Euclidian geometry leading to “the Application of Oblique Triangles in plaine sayling,” as well as practical tasks, such as “ye use of the Davis Quadrant.” Schotte turns the tale of how this “numbersheavy approach to teaching British mariners in the 1680s signals the emergence of a new conception of navigation,” into a compelling, fast-paced story of culture, science, and technologies like printing, instrument making, ship design, and navigation, and how they developed into the specialized disciplines in the post-Enlightenment world we recognize today. SEA HISTORY 172, AUTUMN 2020