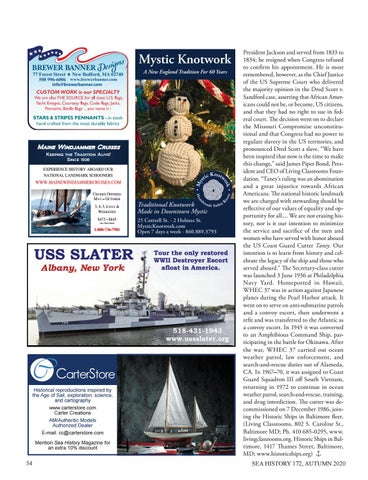 President Jackson and served from 1833 to 1834; he resigned when Congress refused to confirm his appointment. He is most remembered, however, as the Chief Justice of the US Supreme Court who delivered the majority opinion in the Dred Scott v. Sandford case, asserting that African Americans could not be, or become, US citizens, and that they had no right to sue in federal court. The decision went on to declare the Missouri Compromise unconstitutional and that Congress had no power to regulate slavery in the US territories, and pronounced Dred Scott a slave. “We have been inspired that now is the time to make this change,” said James Piper Bond, President and CEO of Living Classrooms Foundation. “Taney’s ruling was an abomination and a great injustice towards African Americans. The national historic landmark we are charged with stewarding should be reflective of our values of equality and opportunity for all.... We are not erasing history, nor is it our intention to minimize the service and sacrifice of the men and women who have served with honor aboard the US Coast Guard Cutter Taney. Our intention is to learn from history and celebrate the legacy of the ship and those who served aboard.” The Secretary-class cutter was launched 3 June 1936 at Philadelphia Navy Yard. Homeported in Hawaii, WHEC 37 was in action against Japanese planes during the Pearl Harbor attack. It went on to serve on anti-submarine patrols and a convoy escort, then underwent a refit and was transferred to the Atlantic as a convoy escort. In 1945 it was converted to an Amphibious Command Ship, participating in the battle for Okinawa. After the war, WHEC 37 carried out ocean weather patrol, law enforcement, and search-and-rescue duties out of Alameda, CA. In 1967–70, it was assigned to Coast Guard Squadron III off South Vietnam, returning in 1972 to continue in ocean weather patrol, search-and-rescue, training, and drug interdiction. The cutter was decommissioned on 7 December 1986, joining the Historic Ships in Baltimore fleet. (Living Classrooms, 802 S. Caroline St., Baltimore MD; Ph. 410 685-0295, www. livingclassrooms.org. Historic Ships in Baltimore, 1417 Thames Street, Baltimore, MD; www.historicships.org) SEA HISTORY 172, AUTUMN 2020