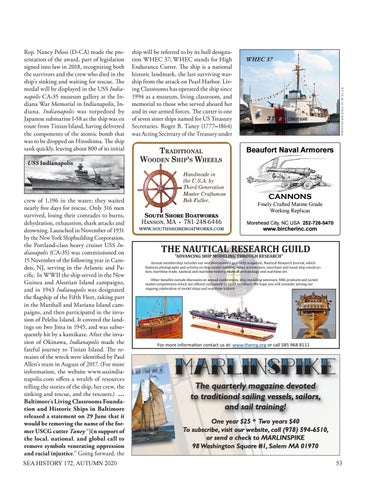 crew of 1,196 in the water; they waited nearly five days for rescue. Only 316 men survived, losing their comrades to burns, dehydration, exhaustion, shark attacks and drowning. Launched in November of 1931 by the New York Shipbuilding Corporation, the Portland-class heavy cruiser USS Indianapolis (CA-35) was commissioned on 15 November of the following year in Camden, NJ, serving in the Atlantic and Pacific. In WWII the ship served in the New Guinea and Aleutian Island campaigns, and in 1943 Indianapolis was designated the flagship of the Fifth Fleet, taking part in the Marshall and Mariana Island campaigns, and then participated in the invasion of Peleliu Island. It covered the landings on Iwo Jima in 1945, and was subsequently hit by a kamikaze. After the invasion of Okinawa, Indianapolis made the fateful journey to Tinian Island. The remains of the wreck were identified by Paul Allen’s team in August of 2017. (For more information, the website www.ussindianapolis.com offers a wealth of resources telling the stories of the ship, her crew, the sinking and rescue, and the rescuers.) … Baltimore’s Living Classrooms Foundation and Historic Ships in Baltimore released a statement on 29 June that it would be removing the name of the former USCG cutter Taney “[i]n support of the local, national, and global call to remove symbols venerating oppression and racial injustice.” Going forward, the

ship will be referred to by its hull designation WHEC 37; WHEC stands for High Endurance Cutter. The ship is a national historic landmark, the last surviving warship from the attack on Pearl Harbor. Living Classrooms has operated the ship since 1994 as a museum, living classroom, and memorial to those who served aboard her and in our armed forces. The cutter is one of seven sister ships named for US Treasury Secretaries. Roger B. Taney (1777–1864) was Acting Secretary of the Treasury under

Rep. Nancy Pelosi (D-CA) made the presentation of the award, part of legislation signed into law in 2018, recognizing both the survivors and the crew who died in the ship’s sinking and waiting for rescue. The medal will be displayed in the USS Indianapolis CA-35 museum gallery at the Indiana War Memorial in Indianapolis, Indiana. Indianapolis was torpedoed by Japanese submarine I-58 as the ship was en route from Tinian Island, having delivered the components of the atomic bomb that was to be dropped on Hiroshima. The ship sank quickly, leaving about 800 of its initial