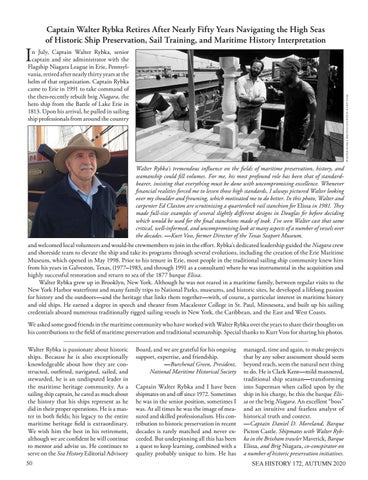 n July, Captain Walter Rybka, senior captain and site administrator with the Flagship Niagara League in Erie, Pennsylvania, retired after nearly thirty years at the helm of that organization. Captain Rybka came to Erie in 1991 to take command of the then-recently rebuilt brig Niagara, the hero ship from the Battle of Lake Erie in 1813. Upon his arrival, he pulled in sailing ship professionals from around the country

Walter Rybka’s tremendous influence on the fields of maritime preservation, history, and seamanship could fill volumes. For me, his most profound role has been that of standardbearer, insisting that everything must be done with uncompromising excellence. Whenever financial realities forced me to lessen those high standards, I always pictured Walter looking over my shoulder and frowning, which motivated me to do better. In this photo, Walter and carpenter Ed Claxton are scrutinizing a quarterdeck rail stanchion for Elissa in 1981. They made full-size examples of several slightly different designs in Douglas fir before deciding which would be used for the final stanchions made of teak. I’ve seen Walter cast that same critical, well-informed, and uncompromising look at many aspects of a number of vessels over the decades. —Kurt Voss, former Director of the Texas Seaport Museum. and welcomed local volunteers and would-be crewmembers to join in the effort. Rybka’s dedicated leadership guided the Niagara crew and shoreside team to elevate the ship and take its programs through several evolutions, including the creation of the Erie Maritime Museum, which opened in May 1998. Prior to his tenure in Erie, most people in the traditional sailing ship community knew him from his years in Galveston, Texas, (1977–1983, and through 1991 as a consultant) where he was instrumental in the acquisition and highly successful restoration and return to sea of the 1877 barque Elissa. Walter Rybka grew up in Brooklyn, New York. Although he was not reared in a maritime family, between regular visits to the New York Harbor waterfront and many family trips to National Parks, museums, and historic sites, he developed a lifelong passion for history and the outdoors—and the heritage that links them together—with, of course, a particular interest in maritime history and old ships. He earned a degree in speech and theater from Macalester College in St. Paul, Minnesota, and built up his sailing credentials aboard numerous traditionally rigged sailing vessels in New York, the Caribbean, and the East and West Coasts. We asked some good friends in the maritime community who have worked with Walter Rybka over the years to share their thoughts on his contributions to the field of maritime preservation and traditional seamanship. Special thanks to Kurt Voss for sharing his photos. Walter Rybka is passionate about historic ships. Because he is also exceptionally knowledgeable about how they are constructed, outfitted, navigated, sailed, and stewarded, he is an undisputed leader in the maritime heritage community. As a sailing ship captain, he cared as much about the history that his ships represent as he did in their proper operations. He is a master in both fields; his legacy to the entire maritime heritage field is extraordinary. We wish him the best in his retirement, although we are confident he will continue to mentor and advise us. He continues to serve on the Sea History Editorial Advisory 50

Board, and we are grateful for his ongoing support, expertise, and friendship. —Burchenal Green, President, National Maritime Historical Society Captain Walter Rybka and I have been shipmates on and off since 1972. Sometimes he was in the senior position, sometimes I was. At all times he was the image of measured and skilled professionalism. His contribution to historic preservation in recent decades is rarely matched and never exceeded. But underpinning all this has been a quest to keep learning, combined with a quality probably unique to him. He has

managed, time and again, to make projects that by any sober assessment should seem beyond reach, seem the natural next thing to do. He is Clark Kent—mild mannered, traditional ship seaman—transforming into Superman when called upon by the ship in his charge, be this the barque Elissa or the brig Niagara. An excellent “boss” and an intuitive and fearless analyst of historical truth and context. —Captain Daniel D. Moreland, Barque Picton Castle. Shipmates with Walter Rybka in the Brixham trawler Maverick, Barque Elissa, and Brig Niagara, co-conspirator on a number of historic preservation initiatives. SEA HISTORY 172, AUTUMN 2020