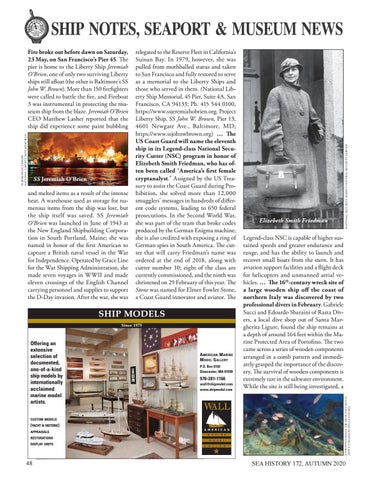 and melted items as a result of the intense heat. A warehouse used as storage for numerous items from the ship was lost, but the ship itself was saved. SS Jeremiah O’Brien was launched in June of 1943 at the New England Shipbuilding Corporation in South Portland, Maine; she was named in honor of the first American to capture a British naval vessel in the War for Independence. Operated by Grace Line for the War Shipping Administration, she made seven voyages in WWII and made eleven crossings of the English Channel carrying personnel and supplies to support the D-Day invasion. After the war, she was

relegated to the Reserve Fleet in California’s Suisun Bay. In 1979, however, she was pulled from mothballed status and taken to San Francisco and fully restored to serve as a memorial to the Liberty Ships and those who served in them. (National Liberty Ship Memorial, 45 Pier, Suite 4A, San Francisco, CA 94133; Ph. 415 544 0100, https://www.ssjeremiahobrien.org. Project Liberty Ship, SS John W. Brown, Pier 13, 4601 Newgate Ave., Baltimore, MD; https://www.ssjohnwbrown.org) … The US Coast Guard will name the eleventh ship in its Legend-class National Security Cutter (NSC) program in honor of Elizebeth Smith Friedman, who has often been called “America’s first female cryptanalyst.” Assigned by the US Treasury to assist the Coast Guard during Prohibition, she solved more than 12,000 smugglers’ messages in hundreds of different code systems, leading to 650 federal prosecutions. In the Second World War, she was part of the team that broke codes produced by the German Enigma machine; she is also credited with exposing a ring of German spies in South America. The cutter that will carry Friedman’s name was ordered at the end of 2018, along with cutter number 10; eight of the class are currently commissioned, and the ninth was christened on 29 February of this year. The Pleasant Stone was named forStre Elmer Fowler Stone, 20 aviator. The a Coast Guard innovator and

Elizebeth Smith Friedman Legend-class NSC is capable of higher sustained speeds and greater endurance and range, and has the ability to launch and recover small boats from the stern. It has aviation support facilities and a flight deck for helicopters and unmanned aerial vehicles. … The 16th-century wreck site of a large wooden ship off the coast of northern Italy was discovered by two professional divers in February. Gabriele Succi and Edoardo Sbaraini of Rasta Divers, a local dive shop out of Santa Margherita Ligure, found the ship remains at a depth of around 164 feet within the Marine Protected Area of Portofino. The two came across a series of wooden components arranged in a comb pattern and immediately grasped the importance of the discovery. The survival of wooden components is extremely rare in the saltwater environment. While the site is still being investigated, a

Fire broke out before dawn on Saturday, 23 May, on San Francisco’s Pier 45. The pier is home to the Liberty Ship Jeremiah O’Brien, one of only two surviving Liberty ships still afloat (the other is Baltimore’s SS John W. Brown). More than 150 firefighters were called to battle the fire, and Fireboat 3 was instrumental in protecting the museum ship from the blaze. Jeremiah O’Brien CEO Matthew Lasher reported that the ship did experience some paint bubbling