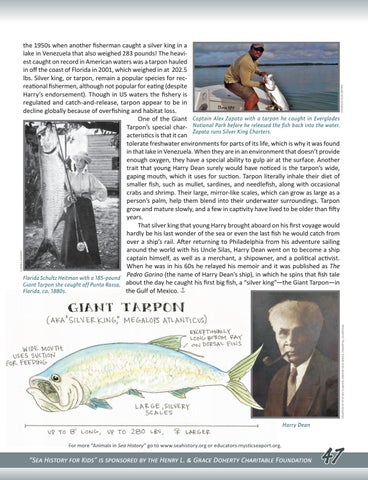 the 1950s when another fisherman caught a silver king in a lake in Venezuela that also weighed 283 pounds! The heaviest caught on record in American waters was a tarpon hauled in off the coast of Florida in 2001, which weighed in at 202.5 lbs. Silver king, or tarpon, remain a popular species for recreational fishermen, although not popular for eating (despite Harry’s endorsement). Though in US waters the fishery is regulated and catch-and-release, tarpon appear to be in decline globally because of overfishing and habitat loss. One of the Giant Captain Alex Zapata with a tarpon he caught in Everglades Tarpon’s special char- National Park before he released the fish back into the water. Zapata runs Silver King Charters. acteristics is that it can tolerate freshwater environments for parts of its life, which is why it was found in that lake in Venezuela. When they are in an environment that doesn’t provide enough oxygen, they have a special ability to gulp air at the surface. Another trait that young Harry Dean surely would have noticed is the tarpon’s wide, gaping mouth, which it uses for suction. Tarpon literally inhale their diet of smaller fish, such as mullet, sardines, and needlefish, along with occasional crabs and shrimp. Their large, mirror-like scales, which can grow as large as a person’s palm, help them blend into their underwater surroundings. Tarpon grow and mature slowly, and a few in captivity have lived to be older than fifty years. That silver king that young Harry brought aboard on his first voyage would hardly be his last wonder of the sea or even the last fish he would catch from over a ship’s rail. After returning to Philadelphia from his adventure sailing around the world with his Uncle Silas, Harry Dean went on to become a ship captain himself, as well as a merchant, a shipowner, and a political activist. When he was in his 60s he relayed his memoir and it was published as The Pedro Gorino (the name of Harry Dean’s ship), in which he spins that fish tale Florida Schultz Heitman with a 185-pound about the day he caught his first big fish, a “silver king”—the Giant Tarpon—in Giant Tarpon she caught off Punta Rassa, the Gulf of Mexico. Florida, ca. 1880s.

Harry Dean For more “Animals in Sea History” go to www.seahistory.org or educators.mysticseaport.org.