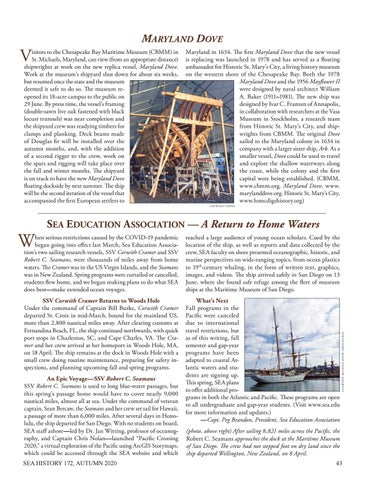 isitors to the Chesapeake Bay Maritime Museum (CBMM) in St. Michaels, Maryland, can view (from an appropriate distance) shipwrights at work on the new replica vessel, Maryland Dove. Work at the museum’s shipyard shut down for about six weeks, but resumed once the state and the museum deemed it safe to do so. The museum reopened its 18-acre campus to the public on 29 June. By press time, the vessel’s framing (double-sawn live oak fastened with black locust trunnels) was near completion and the shipyard crew was readying timbers for clamps and planking. Deck beams made of Douglas fir will be installed over the autumn months, and, with the addition of a second rigger to the crew, work on the spars and rigging will take place over the fall and winter months. The shipyard is on track to have the new Maryland Dove floating dockside by next summer. The ship will be the second iteration of the vessel that accompanied the first European settlers to

Maryland in 1634. The first Maryland Dove that the new vessel is replacing was launched in 1978 and has served as a floating ambassador for Historic St. Mary’s City, a living history museum on the western shore of the Chesapeake Bay. Both the 1978 Maryland Dove and the 1956 Mayflower II were designed by naval architect William A. Baker (1911–1981). The new ship was designed by Ivar C. Franzen of Annapolis, in collaboration with researchers at the Vasa Museum in Stockholm, a research team from Historic St. Mary’s City, and shipwrights from CBMM. The original Dove sailed to the Maryland colony in 1634 in company with a larger sister ship, Ark. As a smaller vessel, Dove could be used to travel and explore the shallow waterways along the coast, while the colony and the first capital were being established. (CBMM, www.cbmm.org. Maryland Dove, www. marylanddove.org. Historic St. Mary’s City, www.hsmcdigshistory.org) courtesy cbmm

Sea Education A ssociation — A Return to Home Waters

hen serious restrictions caused by the COVID-19 pandemic began going into effect last March, Sea Education Association’s two sailing research vessels, SSV Corwith Cramer and SSV Robert C. Seamans, were thousands of miles away from home waters. The Cramer was in the US Virgin Islands, and the Seamans was in New Zealand. Spring programs were curtailed or cancelled, students flew home, and we began making plans to do what SEA does best—make extended ocean voyages.

reached a large audience of young ocean scholars. Cued by the location of the ship, as well as reports and data collected by the crew, SEA faculty on shore presented oceanographic, historic, and marine perspectives on wide-ranging topics, from ocean plastics to 19th-century whaling, in the form of written text, graphics, images, and videos. The ship arrived safely in San Diego on 13 June, where she found safe refuge among the fleet of museum ships at the Maritime Museum of San Diego.

SSV Corwith Cramer Returns to Woods Hole Under the command of Captain Bill Burke, Corwith Cramer departed St. Croix in mid-March, bound for the mainland US, more than 2,800 nautical miles away. After clearing customs at Fernandina Beach, FL, the ship continued northwards, with quick port stops in Charleston, SC, and Cape Charles, VA. The Cramer and her crew arrived at her homeport in Woods Hole, MA, on 18 April. The ship remains at the dock in Woods Hole with a small crew doing routine maintenance, preparing for safety inspections, and planning upcoming fall and spring programs.

What’s Next Fall programs in the Pacific were canceled due to international travel restrictions, but as of this writing, fall semester and gap-year programs have been adapted to coastal Atlantic waters and students are signing up. This spring, SEA plans to offer additional programs in both the Atlantic and Pacific. These programs are open to all undergraduate and gap-year students. (Visit www.sea.edu for more information and updates.) —Capt. Peg Brandon, President, Sea Education Association

An Epic Voyage—SSV Robert C. Seamans SSV Robert C. Seamans is used to long blue-water passages, but this spring’s passage home would have to cover nearly 9,000 nautical miles, almost all at sea. Under the command of veteran captain, Sean Bercaw, the Seamans and her crew set sail for Hawaii, a passage of more than 6,000 miles. After several days in Honolulu, the ship departed for San Diego. With no students on board, SEA staff ashore—led by Dr. Jan Witting, professor of oceanography, and Captain Chris Nolan—launched “Pacific Crossing 2020,” a virtual exploration of the Pacific using ArcGIS Storymaps, which could be accessed through the SEA website and which

(photo, above right) After sailing 8,821 miles across the Pacific, the Robert C. Seamans approaches the dock at the Maritime Museum of San Diego. The crew had not stepped foot on dry land since the ship departed Wellington, New Zealand, on 8 April.