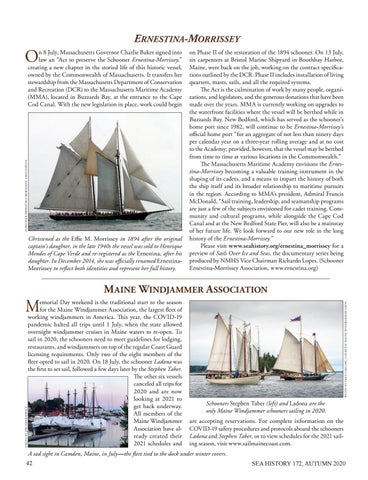 n 8 July, Massachusetts Governor Charlie Baker signed into law an “Act to preserve the Schooner Ernestina-Morrissey,” creating a new chapter in the storied life of this historic vessel, owned by the Commonwealth of Massachusetts. It transfers her stewardship from the Massachusetts Department of Conservation and Recreation (DCR) to the Massachusetts Maritime Academy (MMA), located in Buzzards Bay, at the entrance to the Cape Cod Canal. With the new legislation in place, work could begin

Christened as the Effie M. Morrissey in 1894 after the original captain’s daughter, in the late 1940s the vessel was sold to Henrique Mendes of Cape Verde and re-registered as the Ernestina, after his daughter. In December 2014, she was officially renamed ErnestinaMorrissey to reflect both identities and represent her full history.

emorial Day weekend is the traditional start to the season for the Maine Windjammer Association, the largest fleet of working windjammers in America. This year, the COVID-19 pandemic halted all trips until 1 July, when the state allowed overnight windjammer cruises in Maine waters to re-open. To sail in 2020, the schooners need to meet guidelines for lodging, restaurants, and windjammers on top of the regular Coast Guard licensing requirements. Only two of the eight members of the fleet opted to sail in 2020. On 18 July, the schooner Ladona was the first to set sail, followed a few days later by the Stephen Taber. The other six vessels canceled all trips for 2020 and are now looking at 2021 to get back underway. All members of the Maine Windjammer Association have already created their 2021 schedules and

on Phase II of the restoration of the 1894 schooner. On 13 July, six carpenters at Bristol Marine Shipyard in Boothbay Harbor, Maine, were back on the job, working on the contract specifications outlined by the DCR. Phase II includes installation of living quarters, masts, sails, and all the required systems. The Act is the culmination of work by many people, organizations, and legislators, and the generous donations that have been made over the years. MMA is currently working on upgrades to the waterfront facilities where the vessel will be berthed while in Buzzards Bay. New Bedford, which has served as the schooner’s home port since 1982, will continue to be Ernestina-Morrissey’s official home port “for an aggregate of not less than ninety days per calendar year on a three-year rolling average and at no cost to the Academy; provided, however, that the vessel may be berthed from time to time at various locations in the Commonwealth.” The Massachusetts Maritime Academy envisions the Ernestina-Morrissey becoming a valuable training instrument in the shaping of its cadets, and a means to impart the history of both the ship itself and its broader relationship to maritime pursuits in the region. According to MMA’s president, Admiral Francis McDonald, “Sail training, leadership, and seamanship programs are just a few of the subjects envisioned for cadet training. Community and cultural programs, while alongside the Cape Cod Canal and at the New Bedford State Pier, will also be a mainstay of her future life. We look forward to our new role in the long history of the Ernestina-Morrissey.” Please visit www.seahistory.org/ernestina_morrissey for a preview of Sails Over Ice and Seas, the documentary series being produced by NMHS Vice Chairman Richardo Lopes. (Schooner Ernestina-Morrissey Association, www.ernestina.org)

Schooners Stephen Taber (left) and Ladona are the only Maine Windjammer schooners sailing in 2020. are accepting reservations. For complete information on the COVID-19 safety procedures and protocols aboard the schooners Ladona and Stephen Taber, or to view schedules for the 2021 sailing season, visit www.sailmainecoast.com.

A sad sight in Camden, Maine, in July—the fleet tied to the dock under winter covers. 42