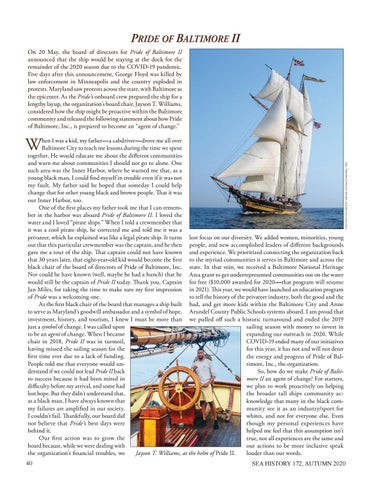 Pride of Baltimore II On 20 May, the board of directors for Pride of Baltimore II announced that the ship would be staying at the dock for the remainder of the 2020 season due to the COVID-19 pandemic. Five days after this announcement, George Floyd was killed by law enforcement in Minneapolis and the country exploded in protests. Maryland saw protests across the state, with Baltimore as the epicenter. As the Pride’s onboard crew prepared the ship for a lengthy layup, the organization’s board chair, Jayson T. Williams, considered how the ship might be proactive within the Baltimore community and released the following statement about how Pride of Baltimore, Inc., is prepared to become an “agent of change.” hen I was a kid, my father—a cabdriver—drove me all over Baltimore City to teach me lessons during the time we spent together. He would educate me about the different communities and warn me about communities I should not go to alone. One such area was the Inner Harbor, where he warned me that, as a young black man, I could find myself in trouble even if it was not my fault. My father said he hoped that someday I could help change that for other young black and brown people. That it was our Inner Harbor, too. One of the first places my father took me that I can remember in the harbor was aboard Pride of Baltimore II. I loved the water and I loved “pirate ships.” When I told a crewmember that it was a cool pirate ship, he corrected me and told me it was a privateer, which he explained was like a legal pirate ship. It turns lost focus on our diversity. We added women, minorities, young out that this particular crewmember was the captain, and he then people, and new accomplished leaders of different backgrounds gave me a tour of the ship. That captain could not have known and experience. We prioritized connecting the organization back that 30 years later, that eight-year-old kid would become the first to the myriad communities it serves in Baltimore and across the black chair of the board of directors of Pride of Baltimore, Inc. state. In that vein, we received a Baltimore National Heritage Nor could he have known (well, maybe he had a hunch) that he Area grant to get underrepresented communities out on the water would still be the captain of Pride II today. Thank you, Captain for free ($10,000 awarded for 2020—that program will resume Jan Miles, for taking the time to make sure my first impression in 2021). This year, we would have launched an education program of Pride was a welcoming one. to tell the history of the privateer industry, both the good and the As the first black chair of the board that manages a ship built bad, and get more kids within the Baltimore City and Anne to serve as Maryland’s goodwill ambassador and a symbol of hope, Arundel County Public Schools systems aboard. I am proud that investment, history, and tourism, I knew I must be more than we pulled off such a historic turnaround and ended the 2019 just a symbol of change. I was called upon sailing season with money to invest in to be an agent of change. When I became expanding our outreach in 2020. While chair in 2018, Pride II was in turmoil, COVID-19 ended many of our initiatives having missed the sailing season for the for this year, it has not and will not deter first time ever due to a lack of funding. the energy and progress of Pride of BalPeople told me that everyone would untimore, Inc., the organization. derstand if we could not lead Pride II back So, how do we make Pride of Baltito success because it had been mired in more II an agent of change? For starters, difficulty before my arrival, and some had we plan to work proactively on helping lost hope. But they didn’t understand that, the broader tall ships community acas a black man, I have always known that knowledge that many in the black commy failures are amplified in our society. munity see it as an industry/sport for I couldn’t fail. Thankfully, our board did whites, and not for everyone else. Even not believe that Pride’s best days were though my personal experiences have behind it. helped me feel that this assumption isn’t Our first action was to grow the true, not all experiences are the same and board because, while we were dealing with our actions to be more inclusive speak the organization’s financial troubles, we Jayson T. Williams, at the helm of Pride II. louder than our words.