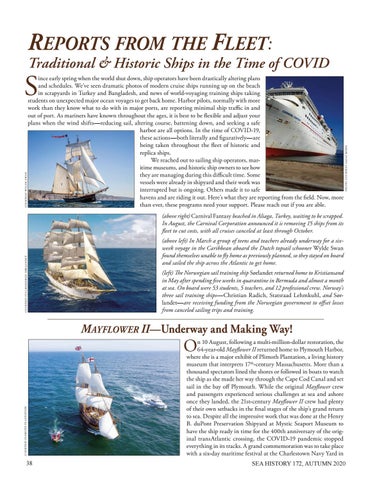 R eports from the Fleet :

Traditional & Historic Ships in the Time of COVID

ince early spring when the world shut down, ship operators have been drastically altering plans and schedules. We’ve seen dramatic photos of modern cruise ships running up on the beach in scrapyards in Turkey and Bangladesh, and news of world-voyaging training ships taking students on unexpected major ocean voyages to get back home. Harbor pilots, normally with more work than they know what to do with in major ports, are reporting minimal ship traffic in and out of port. As mariners have known throughout the ages, it is best to be flexible and adjust your plans when the wind shifts—reducing sail, altering course, battening down, and seeking a safe harbor are all options. In the time of COVID-19, these actions—both literally and figuratively—are being taken throughout the fleet of historic and replica ships. We reached out to sailing ship operators, maritime museums, and historic ship owners to see how they are managing during this difficult time. Some vessels were already in shipyard and their work was interrupted but is ongoing. Others made it to safe havens and are riding it out. Here’s what they are reporting from the field. Now, more than ever, these programs need your support. Please reach out if you are able.

(above right) Carnival Fantasy beached in Aliaga, Turkey, waiting to be scrapped. In August, the Carnival Corporation announced it is removing 15 ships from its fleet to cut costs, with all cruises canceled at least through October. (above left) In March a group of teens and teachers already underway for a sixweek voyage in the Caribbean aboard the Dutch topsail schooner Wylde Swan found themselves unable to fly home as previously planned, so they stayed on board and sailed the ship across the Atlantic to get home. (left) The Norwegian sail training ship Sørlandet returned home to Kristiansand in May after spending five weeks in quarantine in Bermuda and almost a month at sea. On board were 53 students, 5 teachers, and 12 professional crew. Norway’s three sail training ships—Christian Radich, Statsraad Lehmkuhl, and Sørlandet—are receiving funding from the Norwegian government to offset losses from canceled sailing trips and training.

n 10 August, following a multi-million-dollar restoration, the 64-year-old Mayflower II returned home to Plymouth Harbor, where she is a major exhibit of Plimoth Plantation, a living history museum that interprets 17th-century Massachusetts. More than a thousand spectators lined the shores or followed in boats to watch the ship as she made her way through the Cape Cod Canal and set sail in the bay off Plymouth. While the original Mayflower crew and passengers experienced serious challenges at sea and ashore once they landed, the 21st-century Mayflower II crew had plenty of their own setbacks in the final stages of the ship’s grand return to sea. Despite all the impressive work that was done at the Henry B. duPont Preservation Shipyard at Mystic Seaport Museum to have the ship ready in time for the 400th anniversary of the original transAtlantic crossing, the COVID-19 pandemic stopped everything in its tracks. A grand commemoration was to take place with a six-day maritime festival at the Charlestown Navy Yard in SEA HISTORY 172, AUTUMN 2020