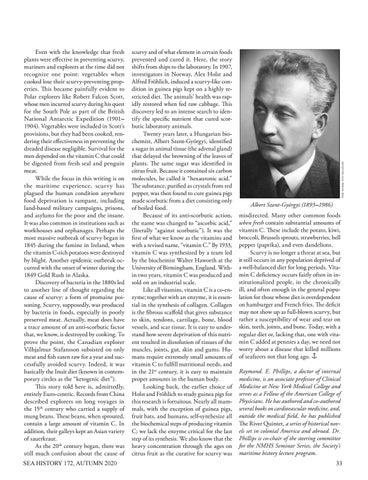 scurvy and of what element in certain foods prevented and cured it. Here, the story shifts from ships to the laboratory. In 1907, investigators in Norway, Alex Holst and Alfred Fröhlich, induced a scurvy-like condition in guinea pigs kept on a highly restricted diet. The animals’ health was rapidly restored when fed raw cabbage. This discovery led to an intense search to identify the specific nutrient that cured scorbutic laboratory animals. Twenty years later, a Hungarian biochemist, Albert Szent-Györgyi, identified a sugar in animal tissue (the adrenal gland) that delayed the browning of the leaves of plants. The same sugar was identified in citrus fruit. Because it contained six carbon molecules, he called it “hexauronic acid.” The substance, purified as crystals from red pepper, was then found to cure guinea pigs made scorbutic from a diet consisting only of boiled food. Because of its anti-scorbutic action, the name was changed to “ascorbic acid,” (literally “against scorbutic”). It was the first of what we know as the vitamins and with a revised name, “vitamin C.” By 1933, vitamin C was synthesized by a team led by the biochemist Walter Haworth at the University of Birmingham, England. Within two years, vitamin C was produced and sold on an industrial scale. Like all vitamins, vitamin C is a co-enzyme; together with an enzyme, it is essential in the synthesis of collagen. Collagen is the fibrous scaffold that gives substance to skin, tendons, cartilage, bone, blood vessels, and scar tissue. It is easy to understand how severe deprivation of this nutrient resulted in dissolution of tissues of the muscles, joints, gut, skin and gums. Humans require extremely small amounts of vitamin C to fulfill nutritional needs, and in the 21st century, it is easy to maintain proper amounts in the human body. Looking back, the earlier choice of Holst and Fröhlich to study guinea pigs for this research is fortuitous. Nearly all mammals, with the exception of guinea pigs, fruit bats, and humans, self-synthesize all the biochemical steps of producing vitamin C; we lack the enzyme critical for the last step of its synthesis. We also know that the heavy concentration through the ages on citrus fruit as the curative for scurvy was

Even with the knowledge that fresh plants were effective in preventing scurvy, mariners and explorers at the time did not recognize one point: vegetables when cooked lose their scurvy-preventing properties. This became painfully evident to Polar explorers like Robert Falcon Scott, whose men incurred scurvy during his quest for the South Pole as part of the British National Antarctic Expedition (1901– 1904). Vegetables were included in Scott’s provisions, but they had been cooked, rendering their effectiveness in preventing the dreaded disease negligible. Survival for the men depended on the vitamin C that could be digested from fresh seal and penguin meat. While the focus in this writing is on the maritime experience, scurvy has plagued the human condition anywhere food deprivation is rampant, including land-based military campaigns, prisons, and asylums for the poor and the insane. It was also common in institutions such as workhouses and orphanages. Perhaps the most massive outbreak of scurvy began in 1845 during the famine in Ireland, when the vitamin C-rich potatoes were destroyed by blight. Another epidemic outbreak occurred with the onset of winter during the 1849 Gold Rush in Alaska. Discovery of bacteria in the 1880s led to another line of thought regarding the cause of scurvy: a form of ptomaine poisoning. Scurvy, supposedly, was produced by bacteria in foods, especially in poorly preserved meat. Actually, meat does have a trace amount of an anti-scorbutic factor that, we know, is destroyed by cooking. To prove the point, the Canadian explorer Vilhjalmur Stafansson subsisted on only meat and fish eaten raw for a year and successfully avoided scurvy. Indeed, it was basically the Inuit diet (known in contemporary circles as the “ketogenic diet”). This story told here is, admittedly, entirely Euro-centric. Records from China described explorers on long voyages in the 15th century who carried a supply of mung beans. These beans, when sprouted, contain a large amount of vitamin C. In addition, their galleys kept an Asian variety of sauerkraut. As the 20th century began, there was still much confusion about the cause of

Albert Szent-Györgyi (1893–1986) misdirected. Many other common foods when fresh contain substantial amounts of vitamin C. These include the potato, kiwi, broccoli, Brussels sprouts, strawberries, bell pepper (paprika), and even dandelions. Scurvy is no longer a threat at sea, but it still occurs in any population deprived of a well-balanced diet for long periods. Vitamin C deficiency occurs fairly often in institutionalized people, in the chronically ill, and often enough in the general population for those whose diet is overdependent on hamburger and French fries. The deficit may not show up as full-blown scurvy, but rather a susceptibility of wear and tear on skin, teeth, joints, and bone. Today, with a regular diet or, lacking that, one with vitamin C added at pennies a day, we need not worry about a disease that killed millions of seafarers not that long ago. Raymond. E. Phillips, a doctor of internal medicine, is an associate professor of Clinical Medicine at New York Medical College and serves as a Fellow of the American College of Physicians. He has authored and co-authored several books on cardiovascular medicine, and, outside the medical field, he has published The River Quintet, a series of historical novels set in colonial America and abroad. Dr. Phillips is co-chair of the steering committee for the NMHS Seminar Series, the Society’s maritime history lecture program.