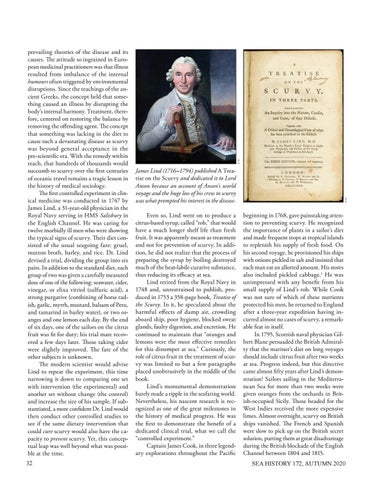 James Lind (1716–1794) published A Treatise on the Scurvy and dedicated it to Lord Anson because an account of Anson’s world voyage and the huge loss of his crew to scurvy was what prompted his interest in the disease. Even so, Lind went on to produce a citrus-based syrup, called “rob,” that would have a much longer shelf life than fresh fruit. It was apparently meant as treatment and not for prevention of scurvy. In addition, he did not realize that the process of preparing the syrup by boiling destroyed much of the heat-labile curative substance, thus reducing its efficacy at sea. Lind retired from the Royal Navy in 1748 and, unrestrained to publish, produced in 1753 a 358-page book, Treatise of the Scurvy. In it, he speculated about the harmful effects of damp air, crowding aboard ship, poor hygiene, blocked sweat glands, faulty digestion, and excretion. He continued to maintain that “oranges and lemons were the most effective remedies for this distemper at sea.” Curiously, the role of citrus fruit in the treatment of scurvy was limited to but a few paragraphs placed unobtrusively in the middle of the book. Lind’s monumental demonstration barely made a ripple in the seafaring world. Nevertheless, his nascent research is recognized as one of the great milestones in the history of medical progress. He was the first to demonstrate the benefit of a dedicated clinical trial, what we call the “controlled experiment.” Captain James Cook, in three legendary explorations throughout the Pacific

prevailing theories of the disease and its causes. The attitude so ingrained in European medicinal practitioners was that illness resulted from imbalance of the internal humours often triggered by environmental disruptions. Since the teachings of the ancient Greeks, the concept held that something caused an illness by disrupting the body’s internal harmony. Treatment, therefore, centered on restoring the balance by removing the offending agent. The concept that something was lacking in the diet to cause such a devastating disease as scurvy was beyond general acceptance in the pre-scientific era. With the remedy within reach, that hundreds of thousands would succumb to scurvy over the first centuries of oceanic travel remains a tragic lesson in the history of medical sociology. The first controlled experiment in clinical medicine was conducted in 1747 by James Lind, a 31-year-old physician in the Royal Navy serving in HMS Salisbury in the English Channel. He was caring for twelve morbidly ill men who were showing the typical signs of scurvy. Their diet consisted of the usual seagoing fare: gruel, mutton broth, barley, and rice. Dr. Lind devised a trial, dividing the group into six pairs. In addition to the standard diet, each group of two was given a carefully measured dose of one of the following: seawater, cider, vinegar, or elixa vitriol (sulfuric acid), a strong purgative (combining of horse radish, garlic, myrrh, mustard, balsam of Peru, and tamarind in barley water), or two oranges and one lemon each day. By the end of six days, one of the sailors on the citrus fruit was fit for duty; his trial mate recovered a few days later. Those taking cider were slightly improved. The fate of the other subjects is unknown. The modern scientist would advise Lind to repeat the experiment, this time narrowing it down to comparing one set with intervention (the experimental) and another set without change (the control) and increase the size of his sample. If substantiated, a more confident Dr. Lind would then conduct other controlled studies to see if the same dietary intervention that could cure scurvy would also have the capacity to prevent scurvy. Yet, this conceptual leap was well beyond what was possible at the time.

beginning in 1768, gave painstaking attention to preventing scurvy. He recognized the importance of plants in a sailor’s diet and made frequent stops at tropical islands to replenish his supply of fresh food. On his second voyage, he provisioned his ships with onions pickled in salt and insisted that each man eat an allotted amount. His stores also included pickled cabbage.1 He was unimpressed with any benefit from his small supply of Lind’s rob. While Cook was not sure of which of these nutrients protected his men, he returned to England after a three-year expedition having incurred almost no cases of scurvy, a remarkable feat in itself. In 1795, Scottish naval physician Gilbert Blane persuaded the British Admiralty that the mariner’s diet on long voyages should include citrus fruit after two weeks at sea. Progress indeed, but this directive came almost fifty years after Lind’s demonstration! Sailors sailing in the Mediterranean Sea for more than two weeks were given oranges from the orchards in British-occupied Sicily. Those headed for the West Indies received the more expensive limes. Almost overnight, scurvy on British ships vanished. The French and Spanish were slow to pick up on the British secret solution, putting them at great disadvantage during the British blockade of the English Channel between 1804 and 1815. SEA HISTORY 172, AUTUMN 2020