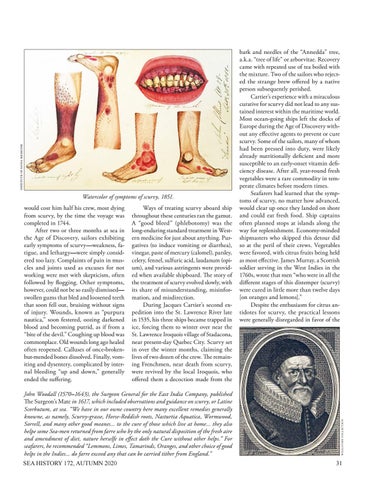 would cost him half his crew, most dying from scurvy, by the time the voyage was completed in 1744. After two or three months at sea in the Age of Discovery, sailors exhibiting early symptoms of scurvy—weakness, fatigue, and lethargy—were simply considered too lazy. Complaints of pain in muscles and joints used as excuses for not working were met with skepticism, often followed by flogging. Other symptoms, however, could not be so easily dismissed— swollen gums that bled and loosened teeth that soon fell out, bruising without signs of injury. Wounds, known as “purpura nautica,” soon festered, oozing darkened blood and becoming putrid, as if from a “bite of the devil.” Coughing up blood was commonplace. Old wounds long ago healed often reopened. Calluses of once-brokenbut-mended bones dissolved. Finally, vomiting and dysentery, complicated by internal bleeding “up and down,” generally ended the suffering.

Ways of treating scurvy aboard ship throughout these centuries ran the gamut. A “good bleed” (phlebotomy) was the long-enduring standard treatment in Western medicine for just about anything. Purgatives (to induce vomiting or diarrhea), vinegar, paste of mercury (calomel), parsley, celery, fennel, sulfuric acid, laudanum (opium), and various astringents were provided when available shipboard. The story of the treatment of scurvy evolved slowly, with its share of misunderstanding, misinformation, and misdirection. During Jacques Cartier’s second expedition into the St. Lawrence River late in 1535, his three ships became trapped in ice, forcing them to winter over near the St. Lawrence Iroquois village of Stadacona, near present-day Quebec City. Scurvy set in over the winter months, claiming the lives of two dozen of the crew. The remaining Frenchmen, near death from scurvy, were revived by the local Iroquois, who offered them a decoction made from the

John Woodall (1570–1643), the Surgeon General for the East India Company, published The Surgeon’s Mate in 1617, which included observations and guidance on scurvy, or Latine Scorbutum, at sea. “We have in our owne country here many excellent remedies generally knowne, as namely, Scurvy-grasse, Horse-Reddish roots, Nasturtia Aquatica, Wormwood, Sorrell, and many other good meanes... to the cure of those which live at home... they also helpe some Sea-men returned from farre who by the only natural disposition of the fresh aire and amendment of diet, nature herselfe in effect doth the Cure without other helps.” For seafarers, he recommended “Lemmons, Limes, Tamarinds, Oranges, and other choice of good helps in the Indies... do farre exceed any that can be carried tither from England.”

Watercolor of symptoms of scurvy, 1851.

bark and needles of the “Annedda” tree, a.k.a. “tree of life” or arborvitae. Recovery came with repeated use of tea boiled with the mixture. Two of the sailors who rejected the strange brew offered by a native person subsequently perished. Cartier’s experience with a miraculous curative for scurvy did not lead to any sustained interest within the maritime world. Most ocean-going ships left the docks of Europe during the Age of Discovery without any effective agents to prevent or cure scurvy. Some of the sailors, many of whom had been pressed into duty, were likely already nutritionally deficient and more susceptible to an early-onset vitamin deficiency disease. After all, year-round fresh vegetables were a rare commodity in temperate climates before modern times. Seafarers had learned that the symptoms of scurvy, no matter how advanced, would clear up once they landed on shore and could eat fresh food. Ship captains often planned stops at islands along the way for replenishment. Economy-minded shipmasters who skipped this detour did so at the peril of their crews. Vegetables were favored, with citrus fruits being held as most effective. James Murray, a Scottish soldier serving in the West Indies in the 1760s, wrote that men “who were in all the different stages of this distemper (scurvy) were cured in little more than twelve days [on oranges and lemons].” Despite the enthusiasm for citrus antidotes for scurvy, the practical lessons were generally disregarded in favor of the