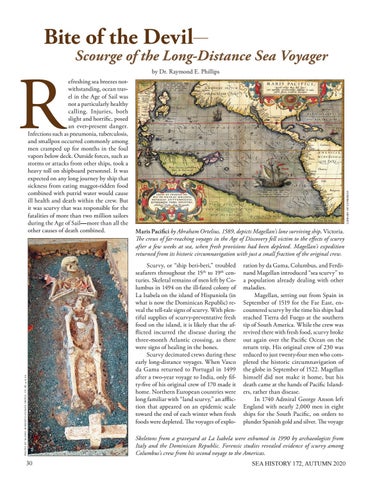 Bite of the Devil—

efreshing sea breezes notwithstanding, ocean travel in the Age of Sail was not a particularly healthy calling. Injuries, both slight and horrific, posed an ever-present danger. Infections such as pneumonia, tuberculosis, and smallpox occurred commonly among men cramped up for months in the foul vapors below deck. Outside forces, such as storms or attacks from other ships, took a heavy toll on shipboard personnel. It was expected on any long journey by ship that sickness from eating maggot-ridden food combined with putrid water would cause ill health and death within the crew. But it was scurvy that was responsible for the fatalities of more than two million sailors during the Age of Sail—more than all the other causes of death combined.

Scourge of the Long-Distance Sea Voyager

Maris Pacifici by Abraham Ortelius, 1589, depicts Magellan’s lone surviving ship, Victoria. The crews of far-reaching voyages in the Age of Discovery fell victim to the effects of scurvy after a few weeks at sea, when fresh provisions had been depleted. Magellan’s expedition returned from its historic circumnavigation with just a small fraction of the original crew. Scurvy, or “ship beri-beri,” troubled seafarers throughout the 15th to 19th centuries. Skeletal remains of men left by Columbus in 1494 on the ill-fated colony of La Isabela on the island of Hispaniola (in what is now the Dominican Republic) reveal the tell-tale signs of scurvy. With plentiful supplies of scurvy-preventative fresh food on the island, it is likely that the afflicted incurred the disease during the three-month Atlantic crossing, as there were signs of healing in the bones. Scurvy decimated crews during these early long-distance voyages. When Vasco da Gama returned to Portugal in 1499 after a two-year voyage to India, only fifty-five of his original crew of 170 made it home. Northern European countries were long familiar with “land scurvy,” an affliction that appeared on an epidemic scale toward the end of each winter when fresh foods were depleted. The voyages of explo-

ration by da Gama, Columbus, and Ferdinand Magellan introduced “sea scurvy” to a population already dealing with other maladies. Magellan, setting out from Spain in September of 1519 for the Far East, encountered scurvy by the time his ships had reached Tierra del Fuego at the southern tip of South America. While the crew was revived there with fresh food, scurvy broke out again over the Pacific Ocean on the return trip. His original crew of 230 was reduced to just twenty-four men who completed the historic circumnavigation of the globe in September of 1522. Magellan himself did not make it home, but his death came at the hands of Pacific Islanders, rather than disease. In 1740 Admiral George Anson left England with nearly 2,000 men in eight ships for the South Pacific, on orders to plunder Spanish gold and silver. The voyage

Skeletons from a graveyard at La Isabela were exhumed in 1990 by archaeologists from Italy and the Dominican Republic. Forensic studies revealed evidence of scurvy among Columbus’s crew from his second voyage to the Americas. SEA HISTORY 172, AUTUMN 2020