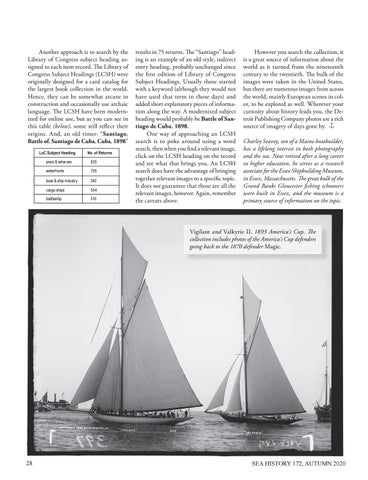 Another approach is to search by the Library of Congress subject heading assigned to each item record. The Library of Congress Subject Headings (LCSH) were originally designed for a card catalog for the largest book collection in the world. Hence, they can be somewhat arcane in construction and occasionally use archaic language. The LCSH have been modernized for online use, but as you can see in this table (below), some still reflect their origins. And, an old timer: “Santiago, Battle of, Santiago de Cuba, Cuba, 1898” LoC Subject Heading

results in 75 returns. The “Santiago” heading is an example of an old style, indirect entry heading, probably unchanged since the first edition of Library of Congress Subject Headings. Usually those started with a keyword (although they would not have used that term in those days) and added short explanatory pieces of information along the way. A modernized subject heading would probably be Battle of Santiago de Cuba, 1898. One way of approaching an LCSH search is to poke around using a word search, then when you find a relevant image, click on the LCSH heading on the record and see what that brings you. An LCSH search does have the advantage of bringing together relevant images to a specific topic. It does not guarantee that those are all the relevant images, however. Again, remember the caveats above.

However you search the collection, it is a great source of information about the world as it turned from the nineteenth century to the twentieth. The bulk of the images were taken in the United States, but there are numerous images from across the world, mainly European scenes in color, to be explored as well. Wherever your curiosity about history leads you, the Detroit Publishing Company photos are a rich source of imagery of days gone by. Charley Seavey, son of a Maine boatbuilder, has a lifelong interest in both photography and the sea. Now retired after a long career in higher education, he serves as a research associate for the Essex Shipbuilding Museum, in Essex, Massachusetts. The great bulk of the Grand Banks Gloucester fishing schooners were built in Essex, and the museum is a primary source of information on the topic.

Vigilant and Valkyrie II, 1893 America’s Cup. The collection includes photos of the America’s Cup defenders going back to the 1870 defender Magic.