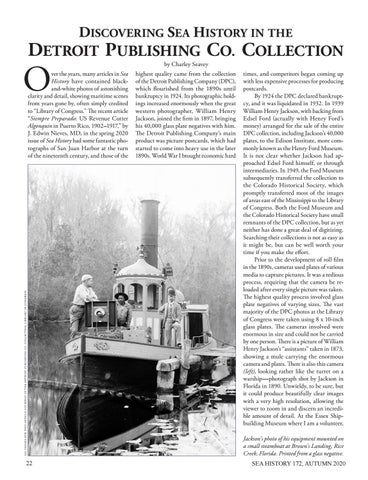 all images for this article courtesy of the detroit publishing co. collection, library of congress

ver the years, many articles in Sea History have contained blackand-white photos of astonishing clarity and detail, showing maritime scenes from years gone by, often simply credited to “Library of Congress.” The recent article “Siempre Preparado: US Revenue Cutter Algonquin in Puerto Rico, 1902–1917,” by J. Edwin Nieves, MD, in the spring 2020 issue of Sea History had some fantastic photographs of San Juan Harbor at the turn of the nineteenth century, and those of the

highest quality came from the collection of the Detroit Publishing Company (DPC), which flourished from the 1890s until bankruptcy in 1924. Its photographic holdings increased enormously when the great western photographer, William Henry Jackson, joined the firm in 1897, bringing his 40,000 glass plate negatives with him. The Detroit Publishing Company’s main product was picture postcards, which had started to come into heavy use in the later 1890s. World War I brought economic hard

times, and competitors began coming up with less expensive processes for producing postcards. By 1924 the DPC declared bankruptcy, and it was liquidated in 1932. In 1939 William Henry Jackson, with backing from Edsel Ford (actually with Henry Ford’s money) arranged for the sale of the entire DPC collection, including Jackson’s 40,000 plates, to the Edison Institute, more commonly known as the Henry Ford Museum. It is not clear whether Jackson had approached Edsel Ford himself, or through intermediaries. In 1949, the Ford Museum subsequently transferred the collection to the Colorado Historical Society, which promptly transferred most of the images of areas east of the Mississippi to the Library of Congress. Both the Ford Museum and the Colorado Historical Society have small remnants of the DPC collection, but as yet neither has done a great deal of digitizing. Searching their collections is not as easy as it might be, but can be well worth your time if you make the effort. Prior to the development of roll film in the 1890s, cameras used plates of various media to capture pictures. It was a tedious process, requiring that the camera be reloaded after every single picture was taken. The highest quality process involved glass plate negatives of varying sizes. The vast majority of the DPC photos at the Library of Congress were taken using 8 x 10-inch glass plates. The cameras involved were enormous in size and could not be carried by one person. There is a picture of William Henry Jackson’s “assistants” taken in 1873, showing a mule carrying the enormous camera and plates. There is also this camera (left), looking rather like the turret on a warship—photograph shot by Jackson in Florida in 1890. Unwieldy, to be sure, but it could produce beautifully clear images with a very high resolution, allowing the viewer to zoom in and discern an incredible amount of detail. At the Essex Shipbuilding Museum where I am a volunteer, Jackson’s photo of his equipment mounted on a small steamboat at Brown’s Landing, Rice Creek, Florida. Printed from a glass negative. SEA HISTORY 172, AUTUMN 2020