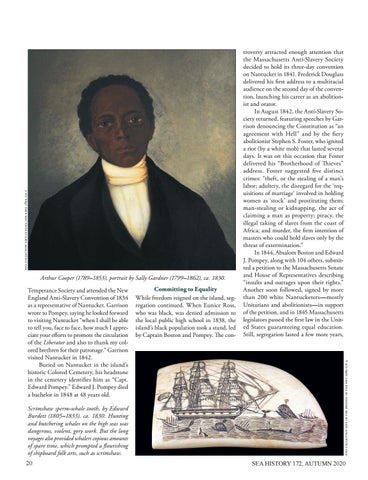 Temperance Society and attended the New England Anti-Slavery Convention of 1834 as a representative of Nantucket. Garrison wrote to Pompey, saying he looked forward to visiting Nantucket “when I shall be able to tell you, face to face, how much I appreciate your efforts to promote the circulation of the Liberator and also to thank my colored brethren for their patronage.” Garrison visited Nantucket in 1842. Buried on Nantucket in the island’s historic Colored Cemetery, his headstone in the cemetery identifies him as “Capt. Edward Pompey.” Edward J. Pompey died a bachelor in 1848 at 48 years old. Scrimshaw sperm-whale tooth, by Edward Burdett (1805–1833), ca. 1830. Hunting and butchering whales on the high seas was dangerous, violent, gory work. But the long voyages also provided whalers copious amounts of spare time, which prompted a flourishing of shipboard folk arts, such as scrimshaw. 20

Committing to Equality While freedom reigned on the island, segregation continued. When Eunice Ross, who was black, was denied admission to the local public high school in 1838, the island’s black population took a stand, led by Captain Boston and Pompey. The con-

troversy attracted enough attention that the Massachusetts Anti-Slavery Society decided to hold its three-day convention on Nantucket in 1841. Frederick Douglass delivered his first address to a multiracial audience on the second day of the convention, launching his career as an abolitionist and orator. In August 1842, the Anti-Slavery Society returned, featuring speeches by Garrison denouncing the Constitution as “an agreement with Hell” and by the fiery abolitionist Stephen S. Foster, who ignited a riot (by a white mob) that lasted several days. It was on this occasion that Foster delivered his “Brotherhood of Thieves” address. Foster suggested five distinct crimes: “theft, or the stealing of a man’s labor; adultery, the disregard for the ‘requisitions of marriage’ involved in holding women as ‘stock’ and prostituting them; man-stealing or kidnapping, the act of claiming a man as property; piracy, the illegal taking of slaves from the coast of Africa; and murder, the firm intention of masters who could hold slaves only by the threat of extermination.” In 1844, Absalom Boston and Edward J. Pompey, along with 104 others, submitted a petition to the Massachusetts Senate and House of Representatives describing “insults and outrages upon their rights.” Another soon followed, signed by more than 200 white Nantucketers—mostly Unitarians and abolitionists—in support of the petition, and in 1845 Massachusetts legislators passed the first law in the United States guaranteeing equal education. Still, segregation lasted a few more years,