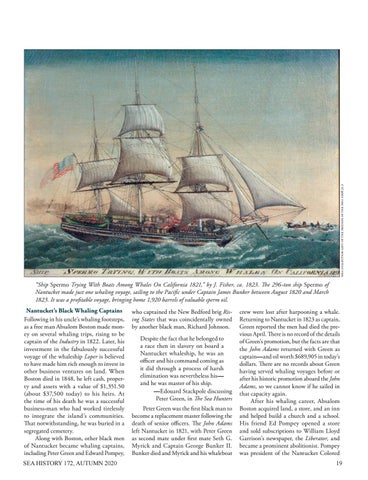 “Ship Spermo Trying With Boats Among Whales On California 1821,” by J. Fisher, ca. 1823. The 296-ton ship Spermo of Nantucket made just one whaling voyage, sailing to the Pacific under Captain James Bunker between August 1820 and March 1823. It was a profitable voyage, bringing home 1,920 barrels of valuable sperm oil. Nantucket’s Black Whaling Captains Following in his uncle’s whaling footsteps, as a free man Absalom Boston made money on several whaling trips, rising to be captain of the Industry in 1822. Later, his investment in the fabulously successful voyage of the whaleship Loper is believed to have made him rich enough to invest in other business ventures on land. When Boston died in 1848, he left cash, property and assets with a value of $1,351.50 (about $37,500 today) to his heirs. At the time of his death he was a successful business-man who had worked tirelessly to integrate the island’s communities. That notwithstanding, he was buried in a segregated cemetery. Along with Boston, other black men of Nantucket became whaling captains, including Peter Green and Edward Pompey,

who captained the New Bedford brig Rising States that was coincidentally owned by another black man, Richard Johnson. Despite the fact that he belonged to a race then in slavery on board a Nantucket whaleship, he was an officer and his command coming as it did through a process of harsh elimination was nevertheless his— and he was master of his ship. —Edouard Stackpole discussing Peter Green, in The Sea Hunters Peter Green was the first black man to become a replacement master following the death of senior officers. The John Adams left Nantucket in 1821, with Peter Green as second mate under first mate Seth G. Myrick and Captain George Bunker II. Bunker died and Myrick and his whaleboat

crew were lost after harpooning a whale. Returning to Nantucket in 1823 as captain, Green reported the men had died the previous April. There is no record of the details of Green’s promotion, but the facts are that the John Adams returned with Green as captain—and oil worth $689,905 in today’s dollars. There are no records about Green having served whaling voyages before or after his historic promotion aboard the John Adams, so we cannot know if he sailed in that capacity again. After his whaling career, Absalom Boston acquired land, a store, and an inn and helped build a church and a school. His friend Ed Pompey opened a store and sold subscriptions to William Lloyd Garrison’s newspaper, the Liberator, and became a prominent abolitionist. Pompey was president of the Nantucket Colored