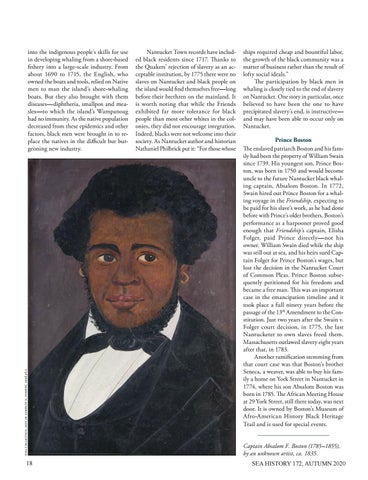 into the indigenous people’s skills for use in developing whaling from a shore-based fishery into a large-scale industry. From about 1690 to 1715, the English, who owned the boats and tools, relied on Native men to man the island’s shore-whaling boats. But they also brought with them diseases—diphtheria, smallpox and measles—to which the island’s Wampanoag had no immunity. As the native population decreased from these epidemics and other factors, black men were brought in to replace the natives in the difficult but burgeoning new industry.

Nantucket Town records have included black residents since 1717. Thanks to the Quakers’ rejection of slavery as an acceptable institution, by 1775 there were no slaves on Nantucket and black people on the island would find themselves free—long before their brethren on the mainland. It is worth noting that while the Friends exhibited far more tolerance for black people than most other whites in the colonies, they did not encourage integration. Indeed, blacks were not welcome into their society. As Nantucket author and historian Nathaniel Philbrick put it: “For those whose

ships required cheap and bountiful labor, the growth of the black community was a matter of business rather than the result of lofty social ideals.” The participation by black men in whaling is closely tied to the end of slavery on Nantucket. One story in particular, once believed to have been the one to have precipitated slavery’s end, is instructive— and may have been able to occur only on Nantucket. Prince Boston The enslaved patriarch Boston and his family had been the property of William Swain since 1739. His youngest son, Prince Boston, was born in 1750 and would become uncle to the future Nantucket black whaling captain, Absalom Boston. In 1772, Swain hired out Prince Boston for a whaling voyage in the Friendship, expecting to be paid for his slave’s work, as he had done before with Prince’s older brothers. Boston’s performance as a harpooner proved good enough that Friendship’s captain, Elisha Folger, paid Prince directly—not his owner. William Swain died while the ship was still out at sea, and his heirs sued Captain Folger for Prince Boston’s wages, but lost the decision in the Nantucket Court of Common Pleas. Prince Boston subsequently petitioned for his freedom and became a free man. This was an important case in the emancipation timeline and it took place a full ninety years before the passage of the 13th Amendment to the Constitution. Just two years after the Swain v. Folger court decision, in 1775, the last Nantucketer to own slaves freed them. Massachusetts outlawed slavery eight years after that, in 1783. Another ramification stemming from that court case was that Boston’s brother Seneca, a weaver, was able to buy his family a home on York Street in Nantucket in 1774, where his son Absalom Boston was born in 1785. The African Meeting House at 29 York Street, still there today, was next door. It is owned by Boston’s Museum of Afro-American History Black Heritage Trail and is used for special events. Captain Absalom F. Boston (1785–1855), by an unknown artist, ca. 1835. SEA HISTORY 172, AUTUMN 2020