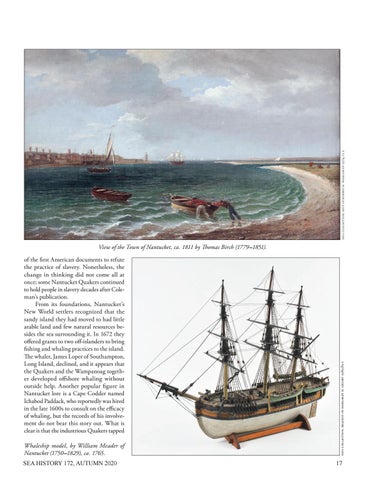 of the first American documents to refute the practice of slavery. Nonetheless, the change in thinking did not come all at once; some Nantucket Quakers continued to hold people in slavery decades after Coleman’s publication. From its foundations, Nantucket’s New World settlers recognized that the sandy island they had moved to had little arable land and few natural resources besides the sea surrounding it. In 1672 they offered grants to two off-islanders to bring fishing and whaling practices to the island. The whaler, James Loper of Southampton, Long Island, declined, and it appears that the Quakers and the Wampanoag together developed offshore whaling without outside help. Another popular figure in Nantucket lore is a Cape Codder named Ichabod Paddack, who reportedly was hired in the late 1600s to consult on the efficacy of whaling, but the records of his involvement do not bear this story out. What is clear is that the industrious Quakers tapped Whaleship model, by William Meader of Nantucket (1750–1829), ca. 1765.