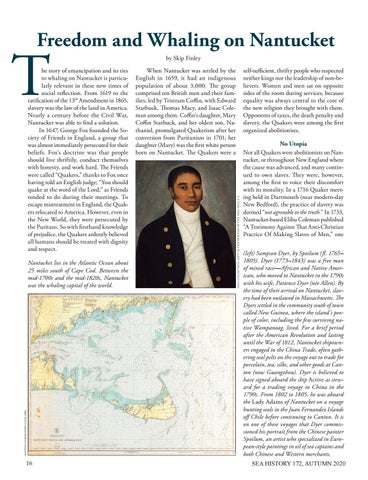 Freedom and Whaling on Nantucket

Nantucket lies in the Atlantic Ocean about 25 miles south of Cape Cod. Between the mid-1700s and the mid-1820s, Nantucket was the whaling capital of the world.

When Nantucket was settled by the English in 1659, it had an indigenous population of about 3,000. The group comprised ten British men and their families, led by Tristram Coffin, with Edward Starbuck, Thomas Macy, and Isaac Coleman among them. Coffin’s daughter, Mary Coffin Starbuck, and her oldest son, Nathaniel, promulgated Quakerism after her conversion from Puritanism in 1701; her daughter (Mary) was the first white person born on Nantucket. The Quakers were a

he story of emancipation and its ties to whaling on Nantucket is particularly relevant in these new times of social reflection. From 1619 to the ratification of the 13th Amendment in 1865, slavery was the law of the land in America. Nearly a century before the Civil War, Nantucket was able to find a solution. In 1647, George Fox founded the Society of Friends in England, a group that was almost immediately persecuted for their beliefs. Fox’s doctrine was that people should live thriftily, conduct themselves with honesty, and work hard. The Friends were called “Quakers,” thanks to Fox once having told an English judge; “You should quake at the word of the Lord,” as Friends tended to do during their meetings. To escape mistreatment in England, the Quakers relocated to America. However, even in the New World, they were persecuted by the Puritans. So with firsthand knowledge of prejudice, the Quakers ardently believed all humans should be treated with dignity and respect.

by Skip Finley self-sufficient, thrifty people who respected neither kings nor the leadership of non-believers. Women and men sat on opposite sides of the room during services, because equality was always central to the core of the new religion they brought with them. Opponents of taxes, the death penalty and slavery, the Quakers were among the first organized abolitionists. No Utopia Not all Quakers were abolitionists on Nantucket, or throughout New England where the cause was advanced, and many continued to own slaves. They were, however, among the first to voice their discomfort with its morality. In a 1716 Quaker meeting held in Dartmouth (near modern-day New Bedford), the practice of slavery was deemed “not agreeable to the truth.” In 1733, Nantucket-based Elihu Coleman published “A Testimony Against That Anti-Christian Practice Of Making Slaves of Men,” one (left) Sampson Dyer, by Spoilum (fl. 1765– 1805). Dyer (1773–1843) was a free man of mixed race—African and Native American, who moved to Nantucket in the 1790s with his wife, Patience Dyer (née Allen). By the time of their arrival on Nantucket, slavery had been outlawed in Massachusetts. The Dyers settled in the community south of town called New Guinea, where the island’s people of color, including the few surviving native Wampanoag, lived. For a brief period after the American Revolution and lasting until the War of 1812, Nantucket shipowners engaged in the China Trade, often gathering seal pelts on the voyage out to trade for porcelain, tea, silks, and other goods at Canton (now Guangzhou). Dyer is believed to have signed aboard the ship Active as steward for a trading voyage to China in the 1790s. From 1802 to 1805, he was aboard the Lady Adams of Nantucket on a voyage hunting seals in the Juan Fernandez Islands off Chile before continuing to Canton. It is on one of these voyages that Dyer commissioned his portrait from the Chinese painter Spoilum, an artist who specialized in European-style paintings in oil of sea captains and both Chinese and Western merchants. SEA HISTORY 172, AUTUMN 2020