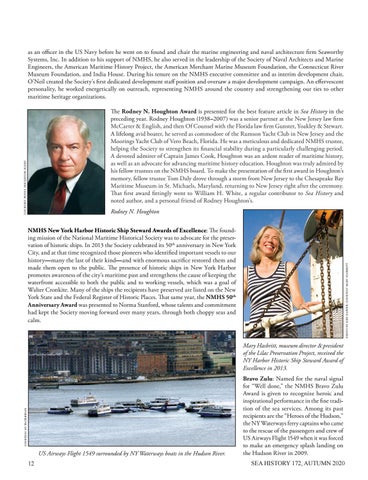 as an officer in the US Navy before he went on to found and chair the marine engineering and naval architecture firm Seaworthy Systems, Inc. In addition to his support of NMHS, he also served in the leadership of the Society of Naval Architects and Marine Engineers, the American Maritime History Project, the American Merchant Marine Museum Foundation, the Connecticut River Museum Foundation, and India House. During his tenure on the NMHS executive committee and as interim development chair, O’Neil created the Society’s first dedicated development staff position and oversaw a major development campaign. An effervescent personality, he worked energetically on outreach, representing NMHS around the country and strengthening our ties to other maritime heritage organizations.

The Rodney N. Houghton Award is presented for the best feature article in Sea History in the preceding year. Rodney Houghton (1938–2007) was a senior partner at the New Jersey law firm McCarter & English, and then Of Counsel with the Florida law firm Gunster, Yoakley & Stewart. A lifelong avid boater, he served as commodore of the Rumson Yacht Club in New Jersey and the Moorings Yacht Club of Vero Beach, Florida. He was a meticulous and dedicated NMHS trustee, helping the Society to strengthen its financial stability during a particularly challenging period. A devoted admirer of Captain James Cook, Houghton was an ardent reader of maritime history, as well as an advocate for advancing maritime history education. Houghton was truly admired by his fellow trustees on the NMHS board. To make the presentation of the first award in Houghton’s memory, fellow trustee Tom Daly drove through a storm from New Jersey to the Chesapeake Bay Maritime Museum in St. Michaels, Maryland, returning to New Jersey right after the ceremony. That first award fittingly went to William H. White, a regular contributor to Sea History and noted author, and a personal friend of Rodney Houghton’s. Rodney N. Houghton

NMHS New York Harbor Historic Ship Steward Awards of Excellence: The founding mission of the National Maritime Historical Society was to advocate for the preservation of historic ships. In 2013 the Society celebrated its 50th anniversary in New York City, and at that time recognized those pioneers who identified important vessels to our history—many the last of their kind—and with enormous sacrifice restored them and made them open to the public. The presence of historic ships in New York Harbor promotes awareness of the city’s maritime past and strengthens the cause of keeping the waterfront accessible to both the public and to working vessels, which was a goal of Walter Cronkite. Many of the ships the recipients have preserved are listed on the New York State and the Federal Register of Historic Places. That same year, the NMHS 50th Anniversary Award was presented to Norma Stanford, whose talents and commitment had kept the Society moving forward over many years, through both choppy seas and calm.

US Airways Flight 1549 surrounded by NY Waterways boats in the Hudson River. 12

Bravo Zulu: Named for the naval signal for “Well done,” the NMHS Bravo Zulu Award is given to recognize heroic and inspirational performance in the fine tradition of the sea services. Among its past recipients are the “Heroes of the Hudson,” the NY Waterways ferry captains who came to the rescue of the passengers and crew of US Airways Flight 1549 when it was forced to make an emergency splash landing on the Hudson River in 2009. SEA HISTORY 172, AUTUMN 2020