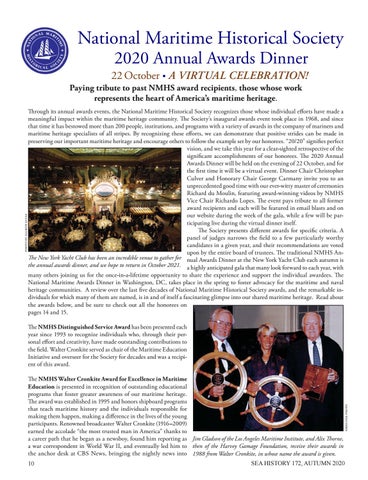 Paying tribute to past NMHS award recipients, those whose work represents the heart of America’s maritime heritage.

Through its annual awards events, the National Maritime Historical Society recognizes those whose individual efforts have made a meaningful impact within the maritime heritage community. The Society’s inaugural awards event took place in 1968, and since that time it has bestowed more than 200 people, institutions, and programs with a variety of awards in the company of mariners and maritime heritage specialists of all stripes. By recognizing these efforts, we can demonstrate that positive strides can be made in preserving our important maritime heritage and encourage others to follow the example set by our honorees. “20/20” signifies perfect vision, and we take this year for a clear-sighted retrospective of the significant accomplishments of our honorees. The 2020 Annual Awards Dinner will be held on the evening of 22 October, and for the first time it will be a virtual event. Dinner Chair Christopher Culver and Honorary Chair George Carmany invite you to an unprecedented good time with our ever-witty master of ceremonies Richard du Moulin, featuring award-winning videos by NMHS Vice Chair Richardo Lopes. The event pays tribute to all former award recipients and each will be featured in email blasts and on our website during the week of the gala, while a few will be participating live during the virtual dinner itself. The Society presents different awards for specific criteria. A panel of judges narrows the field to a few particularly worthy candidates in a given year, and their recommendations are voted upon by the entire board of trustees. The traditional NMHS AnThe New York Yacht Club has been an incredible venue to gather for nual Awards Dinner at the New York Yacht Club each autumn is the annual awards dinner, and we hope to return in October 2021. a highly anticipated gala that many look forward to each year, with many others joining us for the once-in-a-lifetime opportunity to share the experience and support the individual awardees. The National Maritime Awards Dinner in Washington, DC, takes place in the spring to foster advocacy for the maritime and naval heritage communities. A review over the last five decades of National Maritime Historical Society awards, and the remarkable individuals for which many of them are named, is in and of itself a fascinating glimpse into our shared maritime heritage. Read about the awards below, and be sure to check out all the honorees on pages 14 and 15.

The NMHS Walter Cronkite Award for Excellence in Maritime Education is presented in recognition of outstanding educational programs that foster greater awareness of our maritime heritage. The award was established in 1995 and honors shipboard programs that teach maritime history and the individuals responsible for making them happen, making a difference in the lives of the young participants. Renowned broadcaster Walter Cronkite (1916–2009) earned the accolade “the most trusted man in America” thanks to a career path that he began as a newsboy, found him reporting as Jim Gladson of the Los Angeles Maritime Institute, and Alix Thorne, a war correspondent in World War II, and eventually led him to then of the Harvey Gamage Foundation, receive their awards in the anchor desk at CBS News, bringing the nightly news into 1988 from Walter Cronkite, in whose name the award is given. 10

The NMHS Distinguished Service Award has been presented each year since 1993 to recognize individuals who, through their personal effort and creativity, have made outstanding contributions to the field. Walter Cronkite served as chair of the Maritime Education Initiative and overseer for the Society for decades and was a recipient of this award.