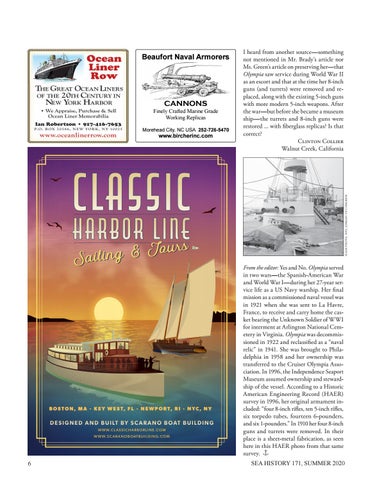 I heard from another source—something not mentioned in Mr. Brady’s article nor Ms. Green’s article on preserving her—that Olympia saw service during World War II as an escort and that at the time her 8-inch guns (and turrets) were removed and replaced, along with the existing 5-inch guns with more modern 5-inch weapons. After the war—but before she became a museum ship—the turrets and 8-inch guns were restored ... with fiberglass replicas? Is that correct? Clinton Collier Walnut Creek, California

From the editor: Yes and No. Olympia served in two wars—the Spanish-American War and World War I—during her 27-year service life as a US Navy warship. Her final mission as a commissioned naval vessel was in 1921 when she was sent to La Havre, France, to receive and carry home the casket bearing the Unknown Soldier of WWI for interment at Arlington National Cemetery in Virginia. Olympia was decommissioned in 1922 and reclassified as a “naval relic” in 1941. She was brought to Philadelphia in 1958 and her ownership was transferred to the Cruiser Olympia Association. In 1996, the Independence Seaport Museum assumed ownership and stewardship of the vessel. According to a Historic American Engineering Record (HAER) survey in 1996, her original armament included: “four 8-inch rifles, ten 5-inch rifles, six torpedo tubes, fourteen 6-pounders, and six 1-pounders.” In 1910 her four 8-inch guns and turrets were removed. In their place is a sheet-metal fabrication, as seen here in this HAER photo from that same survey. SEA HISTORY 171, SUMMER 2020