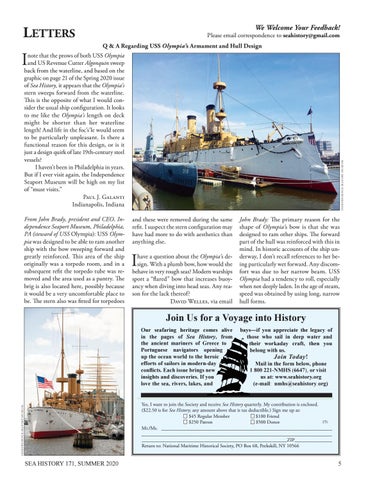 We Welcome Your Feedback!

From John Brady, president and CEO, Independence Seaport Museum, Philadelphia, PA (steward of USS Olympia): USS Olympia was designed to be able to ram another ship with the bow sweeping forward and greatly reinforced. This area of the ship originally was a torpedo room, and in a subsequent refit the torpedo tube was removed and the area used as a pantry. The brig is also located here, possibly because it would be a very uncomfortable place to be. The stern also was fitted for torpedoes

note that the prows of both USS Olympia and US Revenue Cutter Algonquin sweep back from the waterline, and based on the graphic on page 21 of the Spring 2020 issue of Sea History, it appears that the Olympia’s stern sweeps forward from the waterline. This is the opposite of what I would consider the usual ship configuration. It looks to me like the Olympia’s length on deck might be shorter than her waterline length! And life in the foc’s’le would seem to be particularly unpleasant. Is there a functional reason for this design, or is it just a design quirk of late 19th-century steel vessels? I haven’t been in Philadelphia in years. But if I ever visit again, the Independence Seaport Museum will be high on my list of “must visits.” Paul J. Galanti Indianapolis, Indiana and these were removed during the same refit. I suspect the stern configuration may have had more to do with aesthetics than anything else.

have a question about the Olympia’s design. With a plumb bow, how would she behave in very rough seas? Modern warships sport a “flared” bow that increases buoyancy when diving into head seas. Any reason for the lack thereof? David Welles, via email

John Brady: The primary reason for the shape of Olympia’s bow is that she was designed to ram other ships. The forward part of the hull was reinforced with this in mind. In historic accounts of the ship underway, I don’t recall references to her being particularly wet forward. Any discomfort was due to her narrow beam. USS Olympia had a tendency to roll, especially when not deeply laden. In the age of steam, speed was obtained by using long, narrow hull forms.

Join Us for a Voyage into History