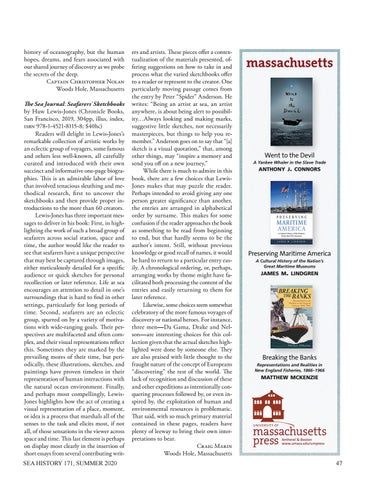 history of oceanography, but the human hopes, dreams, and fears associated with our shared journey of discovery as we probe the secrets of the deep. Captain Christopher Nolan Woods Hole, Massachusetts The Sea Journal: Seafarers’ Sketchbooks by Huw Lewis-Jones (Chronicle Books, San Francisco, 2019, 304pp, illus, index, isbn 978-1-4521-8115-8; $40hc) Readers will delight in Lewis-Jones’s remarkable collection of artistic works by an eclectic group of voyagers, some famous and others less well-known, all carefully curated and introduced with their own succinct and informative one-page biographies. This is an admirable labor of love that involved tenacious sleuthing and methodical research, first to uncover the sketchbooks and then provide proper introductions to the more than 60 creators. Lewis-Jones has three important messages to deliver in his book: First, in highlighting the work of such a broad group of seafarers across social station, space and time, the author would like the reader to see that seafarers have a unique perspective that may best be captured through images, either meticulously detailed for a specific audience or quick sketches for personal recollection or later reference. Life at sea encourages an attention to detail in one’s surroundings that is hard to find in other settings, particularly for long periods of time. Second, seafarers are an eclectic group, spurred on by a variety of motivations with wide-ranging goals. Their perspectives are multifaceted and often complex, and their visual representations reflect this. Sometimes they are marked by the prevailing mores of their time, but periodically, these illustrations, sketches, and paintings have proven timeless in their representation of human interactions with the natural ocean environment. Finally, and perhaps most compellingly, LewisJones highlights how the act of creating a visual representation of a place, moment, or idea is a process that marshals all of the senses to the task and elicits most, if not all, of those sensations in the viewer across space and time. This last element is perhaps on display most clearly in the insertion of short essays from several contributing writ-

ers and artists. These pieces offer a contextualization of the materials presented, offering suggestions on how to take in and process what the varied sketchbooks offer to a reader or represent to the creator. One particularly moving passage comes from the entry by Peter “Spider” Anderson. He writes: “Being an artist at sea, an artist anywhere, is about being alert to possibility…Always looking and making marks, suggestive little sketches, not necessarily masterpieces, but things to help you remember.” Anderson goes on to say that “[a] sketch is a visual quotation,” that, among other things, may “inspire a memory and send you off on a new journey,” While there is much to admire in this book, there are a few choices that LewisJones makes that may puzzle the reader. Perhaps intended to avoid giving any one person greater significance than another, the entries are arranged in alphabetical order by surname. This makes for some confusion if the reader approaches the book as something to be read from beginning to end, but that hardly seems to be the author’s intent. Still, without previous knowledge or good recall of names, it would be hard to return to a particular entry easily. A chronological ordering, or, perhaps, arranging works by theme might have facilitated both processing the content of the entries and easily returning to them for later reference. Likewise, some choices seem somewhat celebratory of the more famous voyages of discovery or national heroes. For instance, three men—Da Gama, Drake and Nelson—are interesting choices for this collection given that the actual sketches highlighted were done by someone else. They are also praised with little thought to the fraught nature of the concept of Europeans “discovering” the rest of the world. The lack of recognition and discussion of these and other expeditions as intentionally conquering processes followed by, or even inspired by, the exploitation of human and environmental resources is problematic. That said, with so much primary material contained in these pages, readers have plenty of leeway to bring their own interpretations to bear. Craig Marin Woods Hole, Massachusetts

Went to the Devil

A Yankee Whaler in the Slave Trade