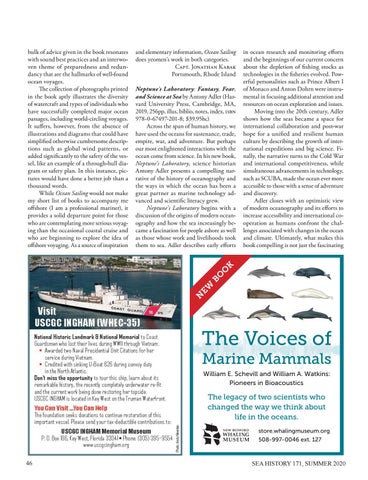 and elementary information, Ocean Sailing does yeomen’s work in both categories. Capt. Jonathan Kabak Portsmouth, Rhode Island Neptune’s Laboratory: Fantasy, Fear, and Science at Sea by Antony Adler (Harvard University Press, Cambridge, MA, 2019, 256pp, illus, biblio, notes, index, isbn 978-0-67497-201-8; $39.95hc) Across the span of human history, we have used the oceans for sustenance, trade, empire, war, and adventure. But perhaps our most enlightened interactions with the ocean come from science. In his new book, Neptune’s Laboratory, science historian Antony Adler presents a compelling narrative of the history of oceanography and the ways in which the ocean has been a great partner as marine technology advanced and scientific literacy grew. Neptune’s Laboratory begins with a discussion of the origins of modern oceanography and how the sea increasingly became a fascination for people ashore as well as those whose work and livelihoods took them to sea. Adler describes early efforts

in ocean research and monitoring efforts and the beginnings of our current concern about the depletion of fishing stocks as technologies in the fisheries evolved. Powerful personalities such as Prince Albert I of Monaco and Anton Dohrn were instrumental in focusing additional attention and resources on ocean exploration and issues. Moving into the 20th century, Adler shows how the seas became a space for international collaboration and post-war hope for a unified and resilient human culture by describing the growth of international expeditions and big science. Finally, the narrative turns to the Cold War and international competitiveness, while simultaneous advancements in technology, such as SCUBA, made the ocean ever more accessible to those with a sense of adventure and discovery. Adler closes with an optimistic view of modern oceanography and its efforts to increase accessibility and international cooperation as humans confront the challenges associated with changes in the ocean and climate. Ultimately, what makes this book compelling is not just the fascinating

bulk of advice given in the book resonates with sound best practices and an interwoven theme of preparedness and redundancy that are the hallmarks of well-found ocean voyages. The collection of photographs printed in the book aptly illustrates the diversity of watercraft and types of individuals who have successfully completed major ocean passages, including world-circling voyages. It suffers, however, from the absence of illustrations and diagrams that could have simplified otherwise cumbersome descriptions such as global wind patterns, or added significantly to the safety of the vessel, like an example of a through-hull diagram or safety plan. In this instance, pictures would have done a better job than a thousand words. While Ocean Sailing would not make my short list of books to accompany me offshore (I am a professional mariner), it provides a solid departure point for those who are contemplating more serious voyaging than the occasional coastal cruise and who are beginning to explore the idea of offshore voyaging. As a source of inspiration

The Voices of Marine Mammals William E. Schevill and William A. Watkins: Pioneers in Bioacoustics

The legacy of two scientists who changed the way we think about life in the oceans. store.whalingmuseum.org 508-997-0046 ext. 127