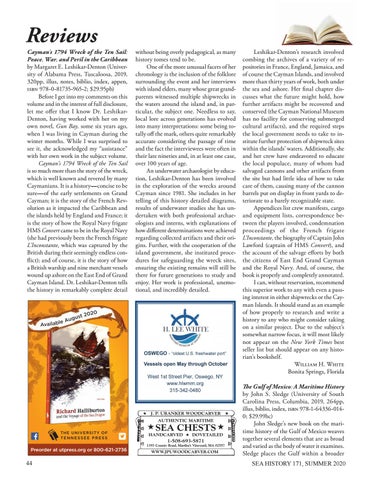 Cayman’s 1794 Wreck of the Ten Sail: Peace, War, and Peril in the Caribbean by Margaret E. Leshikar-Denton (University of Alabama Press, Tuscaloosa, 2019, 320pp, illus, notes, biblio, index, appen, isbn 978-0-81735-965-2; $29.95pb) Before I get into my comments on this volume and in the interest of full disclosure, let me offer that I know Dr. LeshikarDenton, having worked with her on my own novel, Gun Bay, some six years ago, when I was living in Cayman during the winter months. While I was surprised to see it, she acknowledged my “assistance” with her own work in the subject volume. Cayman’s 1794 Wreck of the Ten Sail is so much more than the story of the wreck, which is well known and revered by many Caymanians. It is a history—concise to be sure—of the early settlements on Grand Cayman; it is the story of the French Revolution as it impacted the Caribbean and the islands held by England and France; it is the story of how the Royal Navy frigate HMS Convert came to be in the Royal Navy (she had previously been the French frigate L’Inconstante, which was captured by the British during their seemingly endless conflict); and of course, it is the story of how a British warship and nine merchant vessels wound up ashore on the East End of Grand Cayman Island. Dr. Leshikar-Denton tells the history in remarkably complete detail

without being overly pedagogical, as many history tomes tend to be. One of the more unusual facets of her chronology is the inclusion of the folklore surrounding the event and her interviews with island elders, many whose great grandparents witnessed multiple shipwrecks in the waters around the island and, in particular, the subject one. Needless to say, local lore across generations has evolved into many interpretations: some being totally off the mark, others quite remarkably accurate considering the passage of time and the fact the interviewees were often in their late nineties and, in at least one case, over 100 years of age. An underwater archaeologist by education, Leshikar-Denton has been involved in the exploration of the wrecks around Cayman since 1981. She includes in her telling of this history detailed diagrams, results of underwater studies she has undertaken with both professional archaeologists and interns, with explanations of how different determinations were achieved regarding collected artifacts and their origins. Further, with the cooperation of the island government, she instituted procedures for safeguarding the wreck sites, ensuring the existing remains will still be there for future generations to study and enjoy. Her work is professional, unemotional, and incredibly detailed.

Leshikar-Denton’s research involved combing the archives of a variety of repositories in France, England, Jamaica, and of course the Cayman Islands, and involved more than thirty years of work, both under the sea and ashore. Her final chapter discusses what the future might hold, how further artifacts might be recovered and conserved (the Cayman National Museum has no facility for conserving submerged cultural artifacts), and the required steps the local government needs to take to institute further protection of shipwreck sites within the islands’ waters. Additionally, she and her crew have endeavored to educate the local populace, many of whom had salvaged cannons and other artifacts from the site but had little idea of how to take care of them, causing many of the cannon barrels put on display in front yards to deteriorate to a barely recognizable state. Appendices list crew manifests, cargo and equipment lists, correspondence between the players involved, condemnation proceedings of the French frigate L’Inconstante, the biography of Captain John Lawford (captain of HMS Convert), and the account of the salvage efforts by both the citizens of East End Grand Cayman and the Royal Navy. And, of course, the book is properly and completely annotated. I can, without reservation, recommend this superior work to any with even a passing interest in either shipwrecks or the Cayman Islands. It should stand as an example of how properly to research and write a history to any who might consider taking on a similar project. Due to the subject’s somewhat narrow focus, it will most likely not appear on the New York Times best seller list but should appear on any historian’s bookshelf. William H. White Bonita Springs, Florida The Gulf of Mexico: A Maritime History by John S. Sledge (University of South Carolina Press, Columbia, 2019, 264pp, illus, biblio, index, isbn 978-1-64336-0140; $29.99hc) John Sledge’s new book on the maritime history of the Gulf of Mexico weaves together several elements that are as broad and varied as the body of water it examines. Sledge places the Gulf within a broader SEA HISTORY 171, SUMMER 2020