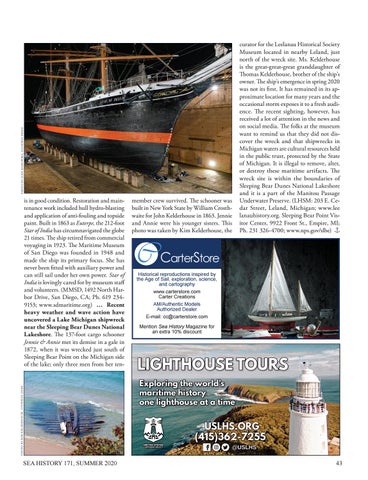 member crew survived. The schooner was built in New York State by William Crosthwaite for John Kelderhouse in 1863. Jennie and Annie were his younger sisters. This photo was taken by Kim Kelderhouse, the

is in good condition. Restoration and maintenance work included hull hydro-blasting and application of anti-fouling and topside paint. Built in 1863 as Euterpe, the 212-foot Star of India has circumnavigated the globe 21 times. The ship retired from commercial voyaging in 1923. The Maritime Museum of San Diego was founded in 1948 and made the ship its primary focus. She has never been fitted with auxiliary power and can still sail under her own power. Star of India is lovingly cared for by museum staff and volunteers. (MMSD, 1492 North Harbor Drive, San Diego, CA; Ph. 619 2349153; www.sdmaritime.org) … Recent heavy weather and wave action have uncovered a Lake Michigan shipwreck near the Sleeping Bear Dunes National Lakeshore. The 137-foot cargo schooner Jennie &amp; Annie met its demise in a gale in 1872, when it was wrecked just south of Sleeping Bear Point on the Michigan side of the lake; only three men from her ten-

curator for the Leelanau Historical Society Museum located in nearby Leland, just north of the wreck site. Ms. Kelderhouse is the great-great-great granddaughter of Thomas Kelderhouse, brother of the ship’s owner. The ship’s emergence in spring 2020 was not its first. It has remained in its approximate location for many years and the occasional storm exposes it to a fresh audience. The recent sighting, however, has received a lot of attention in the news and on social media. The folks at the museum want to remind us that they did not discover the wreck and that shipwrecks in Michigan waters are cultural resources held in the public trust, protected by the State of Michigan. It is illegal to remove, alter, or destroy these maritime artifacts. The wreck site is within the boundaries of Sleeping Bear Dunes National Lakeshore and it is a part of the Manitou Passage Underwater Preserve. (LHSM: 203 E. Cedar Street, Leland, Michigan; www.lee lanauhistory.org. Sleeping Bear Point Visitor Center, 9922 Front St., Empire, MI; Ph. 231 326-4700; www.nps.gov/slbe)