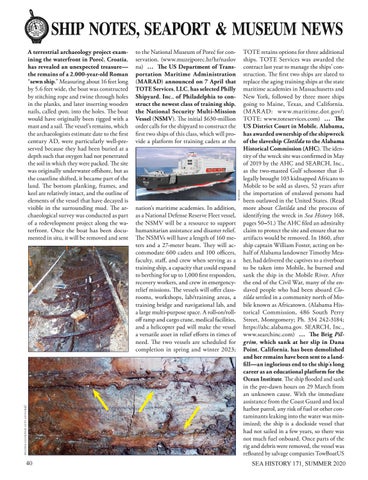 to the National Museum of Poreč for conservation. (www.muzejporec.hr/hr/naslov na) … The US Department of Transportation Maritime Administration (MARAD) announced on 7 April that TOTE Services, LLC, has selected Philly Shipyard, Inc., of Philadelphia to construct the newest class of training ship, the National Security Multi-Mission Vessel (NSMV). The initial $630-million order calls for the shipyard to construct the first two ships of this class, which will provide a platform for training cadets at the

A terrestrial archaeology project examining the waterfront in Poreč, Croatia, has revealed an unexpected treasure— the remains of a 2,000-year-old Roman “sewn ship.” Measuring about 16 feet long by 5.6 feet wide, the boat was constructed by stitching rope and twine through holes in the planks, and later inserting wooden nails, called spots, into the holes. The boat would have originally been rigged with a mast and a sail. The vessel’s remains, which the archaeologists estimate date to the first century AD, were particularly well-preserved because they had been buried at a depth such that oxygen had not penetrated the soil in which they were packed. The site was originally underwater offshore, but as the coastline shifted, it became part of the land. The bottom planking, frames, and keel are relatively intact, and the outline of elements of the vessel that have decayed is visible in the surrounding mud. The archaeological survey was conducted as part of a redevelopment project along the waterfront. Once the boat has been documented in situ, it will be removed and sent

nation’s maritime academies. In addition, as a National Defense Reserve Fleet vessel, the NSMV will be a resource to support humanitarian assistance and disaster relief. The NSMVs will have a length of 160 meters and a 27-meter beam. They will accommodate 600 cadets and 100 officers, faculty, staff, and crew when serving as a training ship, a capacity that could expand to berthing for up to 1,000 first responders, recovery workers, and crew in emergencyrelief missions. The vessels will offer classrooms, workshops, lab/training areas, a training bridge and navigational lab, and a large multi-purpose space. A roll-on/rolloff ramp and cargo crane, medical facilities, and a helicopter pad will make the vessel a versatile asset in relief efforts in times of need. The two vessels are scheduled for completion in spring and winter 2023;

TOTE retains options for three additional ships. TOTE Services was awarded the contract last year to manage the ships’ construction. The first two ships are slated to replace the aging training ships at the state maritime academies in Massachusetts and New York, followed by three more ships going to Maine, Texas, and California. (MAR AD: www.maritime.dot.gov/; TOTE: www.toteservices.com) … The US District Court in Mobile, Alabama, has awarded ownership of the shipwreck of the slaveship Clotilda to the Alabama Historical Commission (AHC). The identity of the wreck site was confirmed in May of 2019 by the AHC and SEARCH, Inc., as the two-masted Gulf schooner that illegally brought 103 kidnapped Africans to Mobile to be sold as slaves, 52 years after the importation of enslaved persons had been outlawed in the United States. (Read more about Clotilda and the process of identifying the wreck in Sea History 168, pages 50–51.) The AHC filed an admiralty claim to protect the site and ensure that no artifacts would be removed. In 1860, after ship captain William Foster, acting on behalf of Alabama landowner Timothy Meaher, had delivered the captives to a riverboat to be taken into Mobile, he burned and sank the ship in the Mobile River. After the end of the Civil War, many of the enslaved people who had been aboard Clotilda settled in a community north of Mobile known as Africatown. (Alabama Historical Commission, 486 South Perry Street, Montgomery; Ph. 334 242-3184; https://ahc.alabama.gov. SEARCH, Inc., www.searchinc.com) … The Brig Pilgrim, which sank at her slip in Dana Point, California, has been demolished and her remains have been sent to a landfill—an inglorious end to the ship’s long career as an educational platform for the Ocean Institute. The ship flooded and sank in the pre-dawn hours on 29 March from an unknown cause. With the immediate assistance from the Coast Guard and local harbor patrol, any risk of fuel or other contaminants leaking into the water was minimized; the ship is a dockside vessel that had not sailed in a few years, so there was not much fuel onboard. Once parts of the rig and debris were removed, the vessel was refloated by salvage companies TowBoatUS SEA HISTORY 171, SUMMER 2020