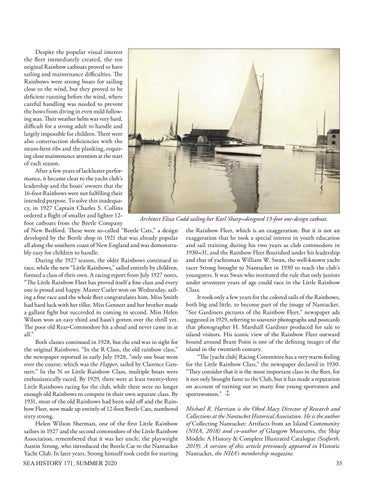 Despite the popular visual interest the fleet immediately created, the ten original Rainbow catboats proved to have sailing and maintenance difficulties. The Rainbows were strong boats for sailing close to the wind, but they proved to be deficient running before the wind, where careful handling was needed to prevent the bows from diving in even mild following seas. Their weather helm was very hard, difficult for a strong adult to handle and largely impossible for children. There were also construction deficiencies with the steam-bent ribs and the planking, requiring close maintenance attention at the start of each season. After a few years of lackluster performance, it became clear to the yacht club’s leadership and the boats’ owners that the 16-foot Rainbows were not fulfilling their intended purpose. To solve this inadequacy, in 1927 Captain Charles S. Collins ordered a flight of smaller and lighter 12Architect Eliza Codd sailing her Karl Sharp–designed 13-foot one-design catboat. foot catboats from the Beetle Company of New Bedford. These were so-called “Beetle Cats,” a design the Rainbow Fleet, which is an exaggeration. But it is not an developed by the Beetle shop in 1921 that was already popular exaggeration that he took a special interest in youth education all along the southern coast of New England and was demonstra- and sail training during his two years as club commodore in 1930–31, and the Rainbow Fleet flourished under his leadership bly easy for children to handle. During the 1927 season, the older Rainbows continued to and that of yachtsman William W. Swan, the well-known yacht race, while the new “Little Rainbows,” sailed entirely by children, racer Strong brought to Nantucket in 1930 to teach the club’s formed a class of their own. A racing report from July 1927 notes, youngsters. It was Swan who instituted the rule that only juniors “The Little Rainbow Fleet has proved itself a fine class and every under seventeen years of age could race in the Little Rainbow one is proud and happy. Master Cutler won on Wednesday, sail- Class. It took only a few years for the colored sails of the Rainbows, ing a fine race and the whole fleet congratulates him. Miss Smith had hard luck with her tiller. Miss Gennett and her brother made both big and little, to become part of the image of Nantucket. a gallant fight but succeeded in coming in second. Miss Helen “See Gardiners pictures of the Rainbow Fleet,” newspaper ads Wilson won an easy third and hasn’t gotten over the thrill yet. suggested in 1929, referring to souvenir photographs and postcards The poor old Rear-Commodore hit a shoal and never came in at that photographer H. Marshall Gardiner produced for sale to island visitors. His iconic view of the Rainbow Fleet outward all.” Both classes continued in 1928, but the end was in sight for bound around Brant Point is one of the defining images of the the original Rainbows. “In the R Class, the old rainbow class,” island in the twentieth century. “The [yacht club] Racing Committee has a very warm feeling the newspaper reported in early July 1928, “only one boat went over the course, which was the Flapper, sailed by Clarence Gen- for the Little Rainbow Class,” the newspaper declared in 1930. nett.” In the N or Little Rainbow Class, multiple boats were “They consider that it is the most important class in the fleet, for enthusiastically raced. By 1929, there were at least twenty-three it not only brought fame to the Club, but it has made a reputation Little Rainbows racing for the club, while there were no longer on account of turning out so many fine young sportsmen and enough old Rainbows to compete in their own separate class. By sportswomen.” 1931, most of the old Rainbows had been sold off and the Rainbow Fleet, now made up entirely of 12-foot Beetle Cats, numbered Michael R. Harrison is the Obed Macy Director of Research and Collections at the Nantucket Historical Association. He is the author sixty strong. Helen Wilson Sherman, one of the first Little Rainbow of Collecting Nantucket: Artifacts from an Island Community sailors in 1927 and the second commodore of the Little Rainbow (NHA, 2018) and co-author of Glasgow Museums, the Ship Association, remembered that it was her uncle, the playwright Models: A History &amp; Complete Illustrated Catalogue (Seaforth, Austin Strong, who introduced the Beetle Cat to the Nantucket 2019). A version of this article previously appeared in Historic Yacht Club. In later years, Strong himself took credit for starting Nantucket, the NHA’s membership magazine. SEA HISTORY 171, SUMMER 2020 35