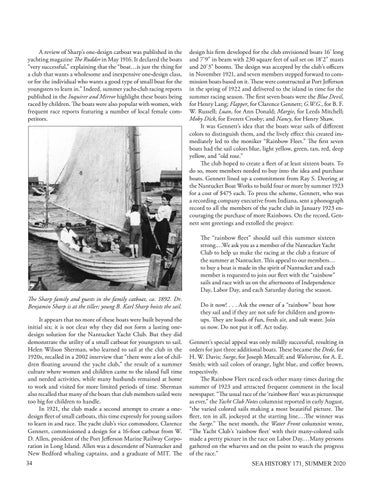 A review of Sharp’s one-design catboat was published in the yachting magazine The Rudder in May 1916. It declared the boats “very successful,” explaining that the “boat…is just the thing for a club that wants a wholesome and inexpensive one-design class, or for the individual who wants a good type of small boat for the youngsters to learn in.” Indeed, summer yacht-club racing reports published in the Inquirer and Mirror highlight these boats being raced by children. The boats were also popular with women, with frequent race reports featuring a number of local female competitors.

design his firm developed for the club envisioned boats 16&#39; long and 7&#39; 9&quot; in beam with 230 square feet of sail set on 18&#39; 2&quot; masts and 20&#39; 3&quot; booms. The design was accepted by the club’s officers in November 1921, and seven members stepped forward to commission boats based on it. These were constructed at Port Jefferson in the spring of 1922 and delivered to the island in time for the summer racing season. The first seven boats were the Blue Devil, for Henry Lang; Flapper, for Clarence Gennett; G.W.G., for B. F. W. Russell; Luan, for Ann Donald; Margie, for Leeds Mitchell; Moby Dick, for Everett Crosby; and Nancy, for Henry Shaw. It was Gennett’s idea that the boats wear sails of different colors to distinguish them, and the lively effect this created immediately led to the moniker “Rainbow Fleet.” The first seven boats had the sail colors blue, light yellow, green, tan, red, deep yellow, and “old rose.” The club hoped to create a fleet of at least sixteen boats. To do so, more members needed to buy into the idea and purchase boats. Gennett lined up a commitment from Ray S. Deering at the Nantucket Boat Works to build four or more by summer 1923 for a cost of $475 each. To press the scheme, Gennett, who was a recording company executive from Indiana, sent a phonograph record to all the members of the yacht club in January 1923 encouraging the purchase of more Rainbows. On the record, Gennett sent greetings and extolled the project: The “rainbow fleet” should sail this summer sixteen strong.…We ask you as a member of the Nantucket Yacht Club to help us make the racing at the club a feature of the summer at Nantucket. This appeal to our members… to buy a boat is made in the spirit of Nantucket and each member is requested to join our fleet with the “rainbow” sails and race with us on the afternoons of Independence Day, Labor Day, and each Saturday during the season.

The Sharp family and guests in the family catboat, ca. 1892. Dr. Benjamin Sharp is at the tiller; young B. Karl Sharp hoists the sail. It appears that no more of these boats were built beyond the initial six; it is not clear why they did not form a lasting onedesign solution for the Nantucket Yacht Club. But they did demonstrate the utility of a small catboat for youngsters to sail. Helen Wilson Sherman, who learned to sail at the club in the 1920s, recalled in a 2002 interview that “there were a lot of children floating around the yacht club,” the result of a summer culture where women and children came to the island full time and needed activities, while many husbands remained at home to work and visited for more limited periods of time. Sherman also recalled that many of the boats that club members sailed were too big for children to handle. In 1921, the club made a second attempt to create a onedesign fleet of small catboats, this time expressly for young sailors to learn in and race. The yacht club’s vice commodore, Clarence Gennett, commissioned a design for a 16-foot catboat from W. D. Allen, president of the Port Jefferson Marine Railway Corporation in Long Island. Allen was a descendent of Nantucket and New Bedford whaling captains, and a graduate of MIT. The 34

Do it now! . . . Ask the owner of a “rainbow” boat how they sail and if they are not safe for children and grownups. They are loads of fun, fresh air, and salt water. Join us now. Do not put it off. Act today. Gennett’s special appeal was only mildly successful, resulting in orders for just three additional boats. These became the Dede, for H. W. Davis; Surge, for Joseph Metcalf; and Wolverine, for A. E. Smith; with sail colors of orange, light blue, and coffee brown, respectively. The Rainbow Fleet raced each other many times during the summer of 1923 and attracted frequent comment in the local newspaper. “The usual race of the ‘rainbow fleet’ was as picturesque as ever,” the Yacht Club Notes columnist reported in early August, “the varied colored sails making a most beautiful picture. The fleet, ten in all, jockeyed at the starting line.…The winner was the Surge.” The next month, the Water Front columnist wrote, “The Yacht Club’s ‘rainbow fleet’ with their many-colored sails made a pretty picture in the race on Labor Day.…Many persons gathered on the wharves and on the point to watch the progress of the race.” SEA HISTORY 171, SUMMER 2020