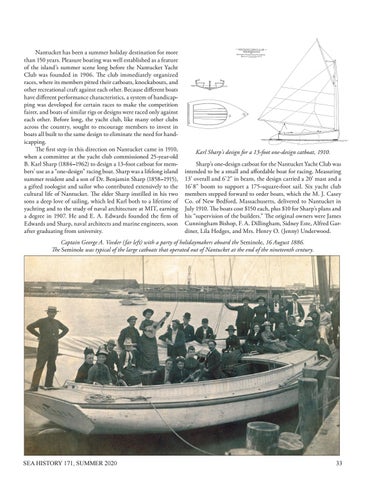 Nantucket has been a summer holiday destination for more than 150 years. Pleasure boating was well established as a feature of the island’s summer scene long before the Nantucket Yacht Club was founded in 1906. The club immediately organized races, where its members pitted their catboats, knockabouts, and other recreational craft against each other. Because different boats have different performance characteristics, a system of handicapping was developed for certain races to make the competition fairer, and boats of similar rigs or designs were raced only against each other. Before long, the yacht club, like many other clubs across the country, sought to encourage members to invest in boats all built to the same design to eliminate the need for handicapping. The first step in this direction on Nantucket came in 1910, when a committee at the yacht club commissioned 25-year-old B. Karl Sharp (1884–1962) to design a 13-foot catboat for members’ use as a “one-design” racing boat. Sharp was a lifelong island summer resident and a son of Dr. Benjamin Sharp (1858–1915), a gifted zoologist and sailor who contributed extensively to the cultural life of Nantucket. The elder Sharp instilled in his two sons a deep love of sailing, which led Karl both to a lifetime of yachting and to the study of naval architecture at MIT, earning a degree in 1907. He and E. A. Edwards founded the firm of Edwards and Sharp, naval architects and marine engineers, soon after graduating from university.

Karl Sharp’s design for a 13-foot one-design catboat, 1910. Sharp’s one-design catboat for the Nantucket Yacht Club was intended to be a small and affordable boat for racing. Measuring 13&#39; overall and 6&#39; 2&quot; in beam, the design carried a 20&#39; mast and a 16&#39; 8&quot; boom to support a 175-square-foot sail. Six yacht club members stepped forward to order boats, which the M. J. Casey Co. of New Bedford, Massachusetts, delivered to Nantucket in July 1910. The boats cost $150 each, plus $10 for Sharp’s plans and his “supervision of the builders.” The original owners were James Cunningham Bishop, F. A. Dillingham, Sidney Este, Alfred Gardiner, Lila Hedges, and Mrs. Henry O. (Jenny) Underwood.

Captain George A. Veeder (far left) with a party of holidaymakers aboard the Seminole, 16 August 1886. The Seminole was typical of the large catboats that operated out of Nantucket at the end of the nineteenth century.