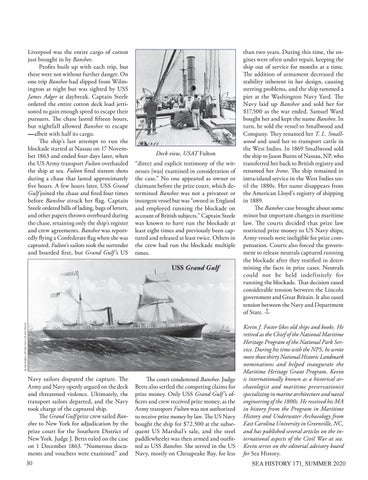 Liverpool was the entire cargo of cotton just brought in by Banshee. Profits built up with each trip, but these were not without further danger. On one trip Banshee had slipped from Wilmington at night but was sighted by USS James Adger at daybreak. Captain Steele ordered the entire cotton deck load jettisoned to gain enough speed to escape their pursuers. The chase lasted fifteen hours, but nightfall allowed Banshee to escape —albeit with half its cargo. The ship’s last attempt to run the blockade started at Nassau on 17 November 1863 and ended four days later, when the US Army transport Fulton overhauled the ship at sea. Fulton fired sixteen shots during a chase that lasted approximately five hours. A few hours later, USS Grand Gulf joined the chase and fired four times before Banshee struck her flag. Captain Steele ordered bills of lading, bags of letters, and other papers thrown overboard during the chase, retaining only the ship’s register and crew agreements. Banshee was reportedly flying a Confederate flag when she was captured. Fulton’s sailors took the surrender and boarded first, but Grand Gulf ’s US

Deck view, USAT Fulton “direct and explicit testimony of the witnesses [was] examined in consideration of the case.” No one appeared as owner or claimant before the prize court, which determined Banshee was not a privateer or insurgent vessel but was “owned in England and employed running the blockade on account of British subjects.” Captain Steele was known to have run the blockade at least eight times and previously been captured and released at least twice. Others in the crew had run the blockade multiple times.

Navy sailors disputed the capture. The Army and Navy openly argued on the deck and threatened violence. Ultimately, the transport sailors departed, and the Navy took charge of the captured ship. The Grand Gulf prize crew sailed Banshee to New York for adjudication by the prize court for the Southern District of New York. Judge J. Betts ruled on the case on 1 December 1863. “Numerous documents and vouchers were examined” and 30

The court condemned Banshee. Judge Betts also settled the competing claims for prize money. Only USS Grand Gulf ’s officers and crew received prize money, as the Army transport Fulton was not authorized to receive prize money by law. The US Navy bought the ship for $72,500 at the subsequent US Marshal’s sale, and the steel paddlewheeler was then armed and outfitted as USS Banshee. She served in the US Navy, mostly on Chesapeake Bay, for less

than two years. During this time, the engines were often under repair, keeping the ship out of service for months at a time. The addition of armament decreased the stability inherent in her design, causing steering problems, and the ship rammed a pier at the Washington Navy Yard. The Navy laid up Banshee and sold her for $17,500 as the war ended. Samuel Ward bought her and kept the name Banshee. In turn, he sold the vessel to Smallwood and Company. They renamed her T. L. Smallwood and used her to transport cattle in the West Indies. In 1869 Smallwood sold the ship to Jason Burns of Nassau, NP, who transferred her back to British registry and renamed her Irene. The ship remained in intra-island service in the West Indies until the 1880s. Her name disappears from the American Lloyd’s registry of shipping in 1889. The Banshee case brought about some minor but important changes in maritime law. The courts decided that prize law restricted prize money to US Navy ships; Army vessels were ineligible for prize compensation. Courts also forced the government to release neutrals captured running the blockade after they testified in determining the facts in prize cases. Neutrals could not be held indefinitely for running the blockade. That decision eased considerable tension between the Lincoln government and Great Britain. It also eased tension between the Navy and Department of State. Kevin J. Foster likes old ships and books. He retired as the Chief of the National Maritime Heritage Program of the National Park Service. During his time with the NPS, he wrote more than thirty National Historic Landmark nominations and helped inaugurate the Maritime Heritage Grant Program. Kevin is internationally known as a historical archaeologist and maritime preservationist specializing in marine architecture and naval engineering of the 1800s. He received his MA in history from the Program in Maritime History and Underwater Archaeology from East Carolina University in Greenville, NC, and has published several articles on the international aspects of the Civil War at sea. Kevin serves on the editorial advisory board for Sea History. SEA HISTORY 171, SUMMER 2020